Why is an atom so tiny

Proportions in the atom

Lump sugar is usually used to combine a leisurely breakfast with a large cup of strong coffee. Planet Schule uses a sugar cube for an experiment and invites you to an extraordinary journey into the microcosm! What do sugar crystals look like? What is the characteristic structure of a sugar molecule? What is inside the atomic nucleus? One can get to the bottom of these questions in the simulation "proportions in the atom".

This application is programmed in HTML5 and is therefore also suitable for use on mobile devices. 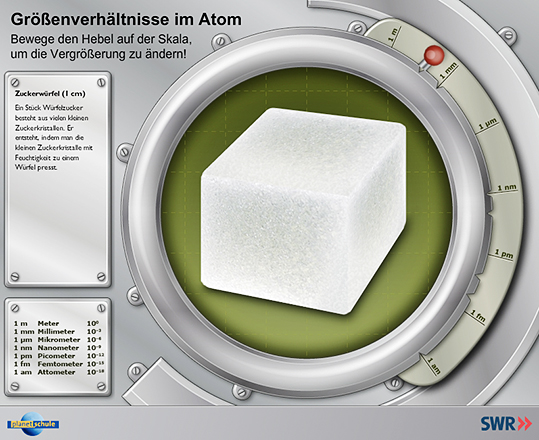 A 1-centimeter sugar lump serves as the object of investigation for the simulation. If you pull the red lever down, the unique journey into the interior of the sugar lump starts - deep into the atomic nucleus.

How the simulation works

In the simulation you can zoom into the interior of an atom. For this you simply have to move the red lever to the desired value on the scale. The following stations are to be explored. 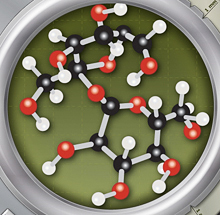 Sugar mostly occurs in crystals, which are formed when water is allowed to evaporate from a sugar solution. The crystals in turn consist of molecules - about 3 trillion in the whole cube.

Our sugar cubes are made up of sucrose molecules. Sucrose is a disaccharide, which means that a molecule is made up of two simple sugars - glucose and fructose. Sugar molecules are compounds made up of carbon, oxygen and hydrogen atoms.

Atoms are the building blocks of molecules. They consist of an atomic nucleus and electrons - exactly six for the carbon atom - that form a spherical shell around the nucleus. It is difficult to state the exact size of an atom because it differs depending on the environment. Most of the atom is the shell - compared to that, the atomic nucleus is tiny.

Although tiny, the nucleus contains almost the entire mass of the atom. An atomic nucleus consists of protons and neutrons. In the case of a carbon atom, there are six protons and six neutrons. 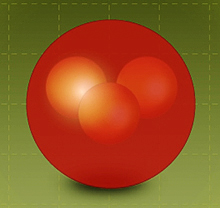 In the interior of the atomic nucleus one finds - besides neutrons - the positively charged protons. A single proton in turn consists of three tiny particles, the so-called quarks.

The proton and its partner, the neutron, are the building blocks of the atomic nucleus. They are roughly the same size and differ in their charge - the neutron is uncharged, the proton is positively charged. Protons and neutrons themselves also consist of smaller particles, of three quarks.

Contrary to what the name "atom" (Greek for "indivisible") says, atoms can very well be further divided - up to the quarks. According to the current state of research, these are actually the smallest particles that make up matter. We know from measurements that they have to be smaller than 1 attometer - they probably even have no extension at all and are point-like.