What is the price of an airplane

Train versus plane: how much does travel really cost?

Read this article in English.

How much does a plane ticket from London to Paris cost? The answer is just an internet search away. Cheap tickets are tempting more and more people in Europe to get on a plane for a short city trip, a family visit or a business trip. It's fast enough for a weekend visit and at times costs significantly less than a train journey.

But many of us take these trips knowing that there are hidden costs. Last but not least, air traffic with its high emissions of greenhouse gases contributes to the fact that climate change is accelerating.

In order to calculate the true costs of travel, DW has collected thousands of ticket prices, travel times and CO2 emissions values ​​for trains and flights on six direct connections between European cities: Berlin-Warsaw, Munich-Budapest, London-Amsterdam, London-Marseille, Paris-Barcelona and Zurich-Milan.

Our analysis shows the routes on which the trains are particularly competitive compared to the airplanes - and how the travel price changes if we had to pay for the long-term environmental damage.

For each of the routes, we recorded thousands of ticket prices over a period of six weeks before departure. The prices for airline tickets come from searches with Google Flights and the prices for train tickets from Trainline; both are platforms that collect prices from different providers. The following graphic shows how much the cheapest direct connection by train and flight costs on a weekly average. 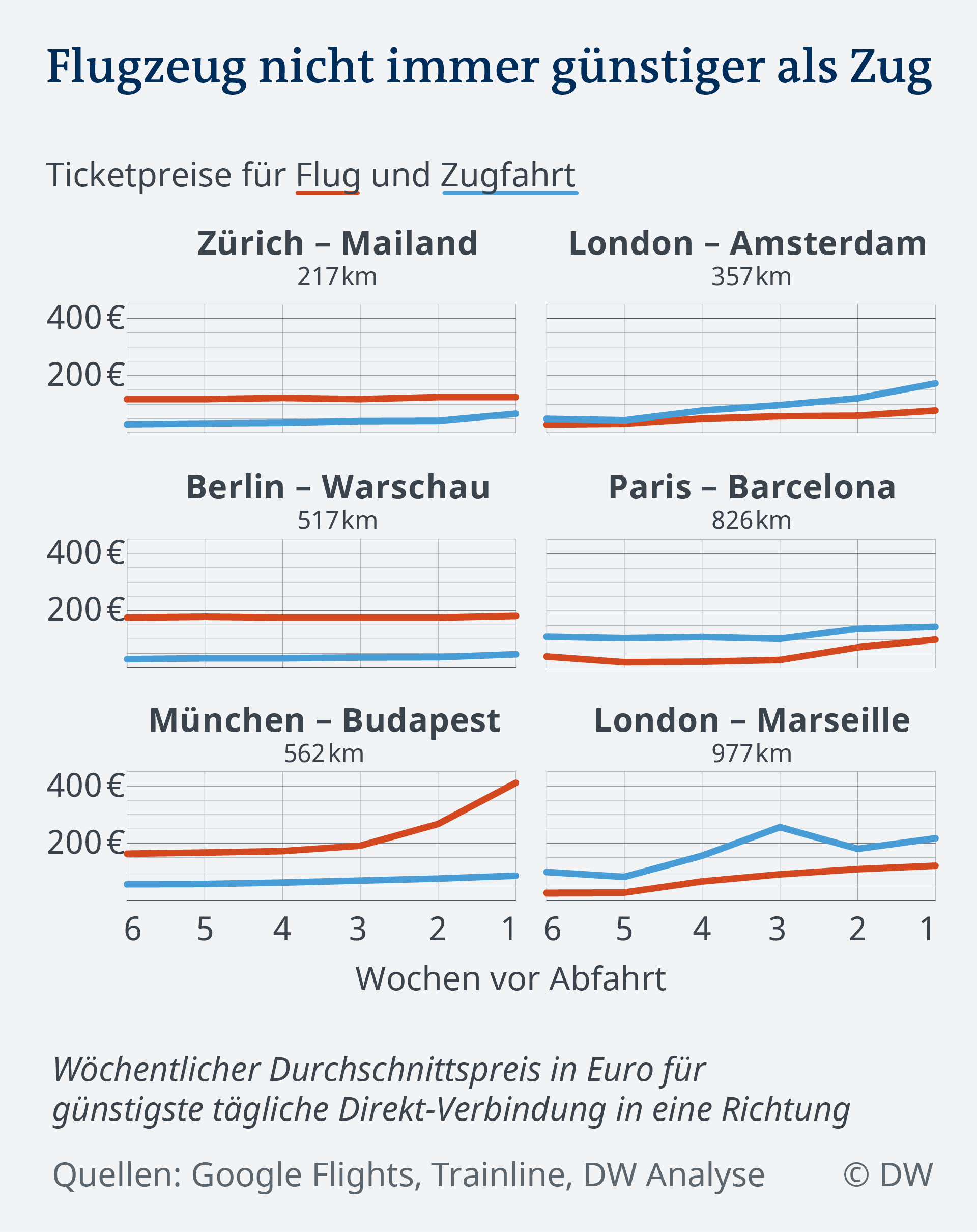 Air tickets are cheaper than train tickets for three of the six routes. For most routes, the earlier you book, the smaller the price difference between the two modes of transport.

For routes on which low-cost airlines fly, it is not surprising that a flight costs less than a train ride. But on three of the routes, the train connections are even cheaper.

When you see how long you will be traveling by train, that can be a deterrent - especially when you compare the travel time with the short flight times. But that's actually not a fair comparison: a train usually connects the city center with the city center, and it is usually sufficient - with the exception of routes to Great Britain - to be at the station a few minutes before departure. Getting to the airport, going through the security checkpoints, waiting at the gate for departure and leaving the destination airport again, on the other hand, easily increases the travel time for a flight by three hours. Then train connections look more advantageous.

Some routes have benefited from investments in rail infrastructure in recent years. The train between Zurich and Milan, for example, runs through the Gotthard tunnel, an eleven billion euro shortcut through the Swiss Alps that cuts the journey time by half an hour. Eurostar launched a direct link between London and Amsterdam this year. And the Paris-Barcelona journey took another 12 hours by train before a new high-speed line opened in 2013.

Anyone who has already flown with a low-cost airline knows the unexpected extra costs: Checking in a piece of luggage or choosing a seat increases the actual flight price. But how can we measure the hidden environmental costs of our trips?

For the greenhouse gas emissions, DW used figures from IFEU, an environmental consultancy that EcoPassenger operates. This website estimates the emissions per passenger for any route.

How much CO2 is released when kerosene is burned is relatively easy to determine. But there is a catch: jet engines also release other environmentally harmful substances - especially at high altitudes - and scientists cannot yet determine exactly how harmful these are to the environment. The additional effect that emissions such as nitrogen oxides, ozone, water vapor, soot and sulfur compounds have on the atmosphere is known as the "Radiative Forcing Index". The IFEU model assumes that this additional greenhouse effect sets in when the flight altitude is more than nine kilometers.

High-speed trains run on electricity, so estimates of their greenhouse gas emissions are based on the emissions from producing the energy they consume. This in turn varies from country to country: Poland, for example, obtained 89 percent of its electricity in 2015 from coal, gas and oil, in Germany that was only 58 percent. 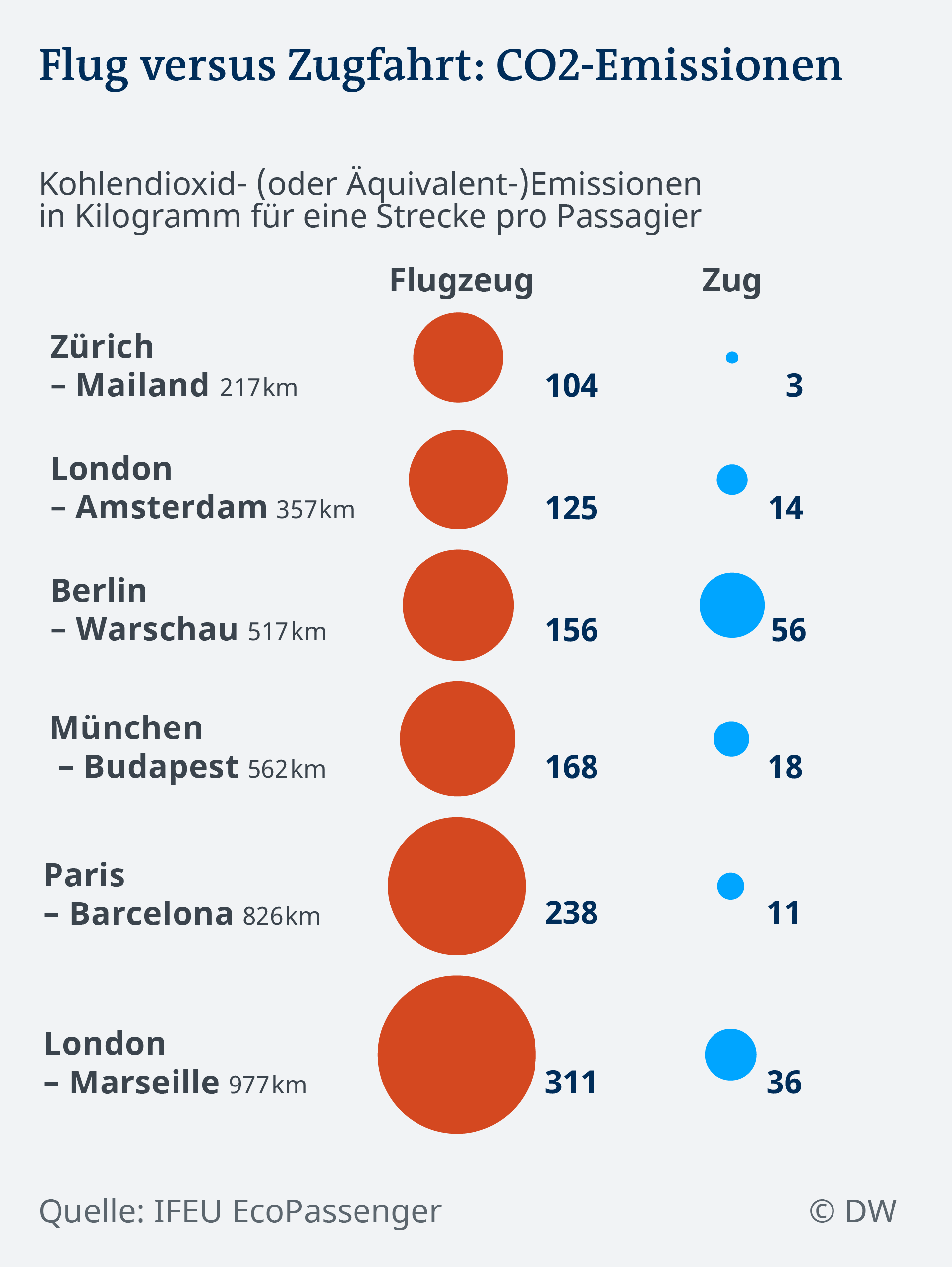 Ticket prices plus the social costs of CO2 emissions

Travel time and ticket prices are not difficult to record, but how are we supposed to estimate whether 248 kilograms of CO2 is a reasonable price for our weekend trip?

This is where the social cost of carbon comes into play. Economists have been working on this idea for years. The theory: if we estimate what climate change will cost society - after all, we know that greenhouse gases cause climate change - we can put a price tag on CO2 emissions.

There is no scientific consensus on what the social costs are. The US Environmental Protection Agency (EPA) has calculated them at $ 42 per metric ton of CO2 by 2020 and $ 69 by 2050. But some scientists say these numbers don't take into account the potentially fatal consequences of climate change - so the values should be at least ten times as high. For its evaluation, DW used 574 US dollars (489 euros) per metric ton of CO2 as a basis, based on research results from the Irish economic and social research institute. This is the highest estimate of the social cost of CO2.

If you add these social costs of CO2 to our train and flight ticket prices, the picture changes:

Planes are cheaper on three of the routes. If you include the social costs of CO2, the actual prices are significantly higher.

We have summarized all the factors - travel price, travel time and CO2 emissions for each route - in a diagram. Smaller triangles represent trips that are cheaper, faster and / or more environmentally friendly.

If you take all aspects into account, it turns out that trains are cheaper than planes on almost all routes.

Smaller triangles represent trips that are cheaper, faster and / or more environmentally friendly. If you factor in realistic travel times and the social costs of CO2, a train journey often costs less than a flight - the blue triangle appears almost entirely within the red triangle.

Of course, this is just an experiment. There is no academic consensus on what the real social cost of CO2 is, or whether calculating it will make people more environmentally conscious.

An additional emissions-based tax on ticket prices could be an effective way to reduce air travel and encourage people to choose greener travel options.

David Hodgkinson, a lecturer at the University of Western Australia, argues in favor of such a carbon tax, especially when you consider how difficult it would be to implement emission reduction projects across national borders. "People understand that," he says. "They probably don't like it, but they understand the benefits of such a tax. Most people, even the aviation industry, would accept the need to pay an additional price on flight emissions."

Hodgkinson is critical of existing initiatives to reduce flight emissions - including the model of CO2 compensation payments by the International Civil Aviation Organization. "States have agreed that the airlines are on board, but it doesn't get to the core of the emissions problem. Emissions are likely to increase year on year," he says. "For some airlines nothing will change well after 2030, and we don't know what the world will be like in 2030 in terms of emissions."

Roger Tyers, a behavioral scientist who studies carbon offsets at the University of Southampton, doesn't think higher costs alone will be enough to reduce demand for air travel. "Flying has become so ingrained in people's behavior that higher prices are unlikely to deter them," he says. "Those who fly are - globally - rich and can take it." In fact, researchers have estimated that only two to three percent of the world's people take an international flight each year.

Tyers says that more needs to be invested in high-speed trains to make train travel simply faster and therefore more attractive. And that people need cultural signs that encourage them to change their behavior. However, European heads of government are unwilling to take action against the increase in passenger air traffic. "It's a very reliable source of economic growth," he says. "The governments don't want us to discuss the sense and nonsense of flying."