Is the NSA studying superstring theory? 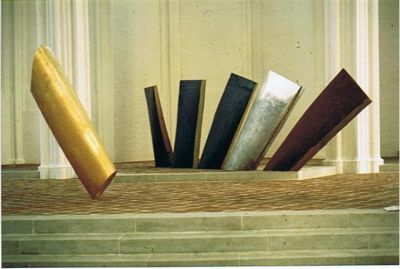 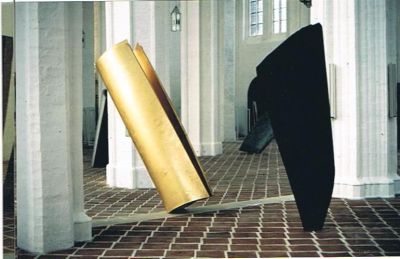 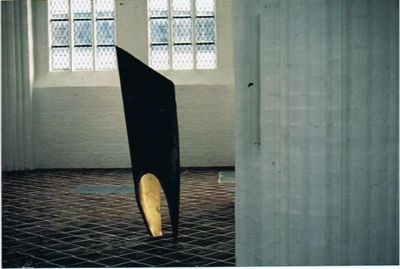 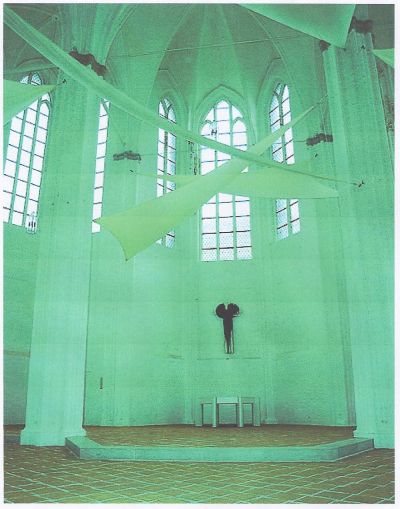 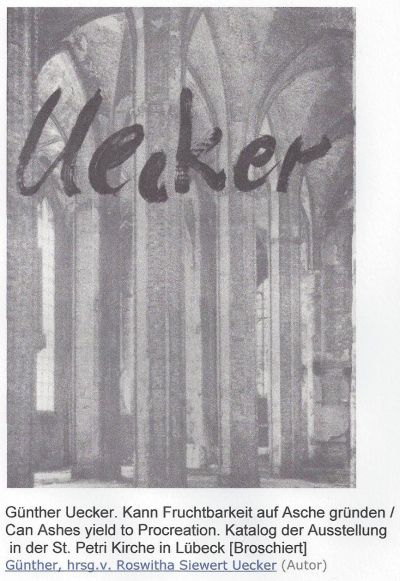 Negation of gravity then means rupture and relativization, actually the dissolution of its absolute effectiveness in the early example of sculptures. The visual sign for this is the diagonal. It breaks out of the ortogonal structure of the geometry and defines itself as a singular sign and movement feature. 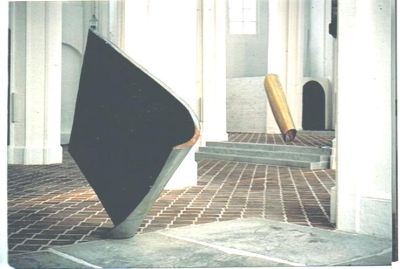 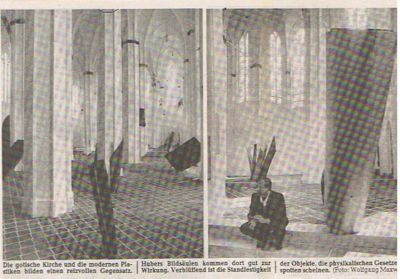 After "Pictures from above", "Painting from above" since 1973, 1981 development of independent pictures. Independent pictures- as a starting point for an intensified examination of art-historical questions on the cultural history of antiquity and modern times. After experimental handling of image and sculpture issues, 1987 Manifesto der Ostruktiv`Kunst (THW) in the RemiseKeller Berlin - 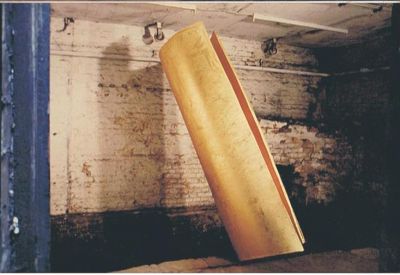 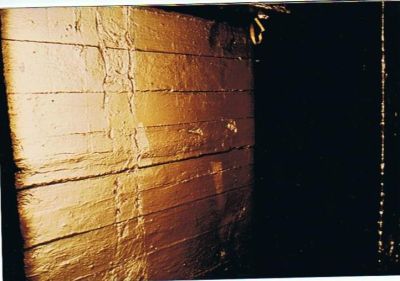 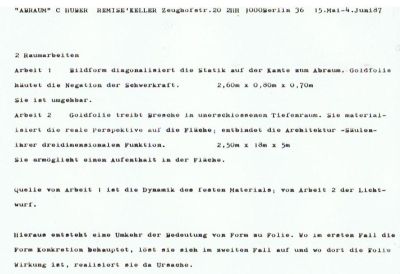 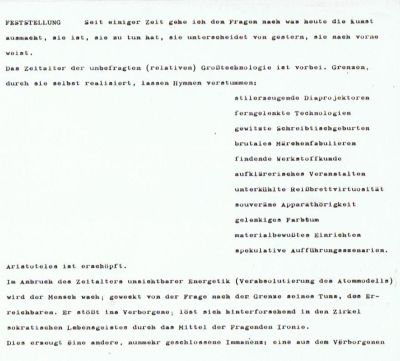 discussed in the Tagesspiegel of May 24th, 1987 - and thesis of "Negation of gravity"or anti-gravity:


About 1. a different perspective on the subject, its view from "above"; Pictures, painting from above, beginningfrom 1973 , Department store picture, escalator, quasi looking down, and from 1977/78 (also - view from the roof
in the inner courtyard, balcony on the street, the mountain into the valley, the rank in the theater scene, the plane
on the ground, skyscraper on the ground, haystack on the threshing floor, gallery on the ground floor):
The view of people, scenes, the place, the apartment, the landscape - in order to overcome the frontal image of the front view, the harsh opposite, the confrontation, the image as a detached second world, which one can avoid for lack of liveliness and dulling habit, which nevertheless shapes one, the "mere walking next to each other, past each other" in short, an unconscious pictorial automatism.
The viewer then no longer stands in front of the picture, but above the picture, falls into the picture, is drawn into it.
And 2. the resulting rounding, in the horizon and the turning at the lower end, in the
practical development of the image carriers to "curved images", to the "independent images" that
merged directly into the sculpture.

It was about tracking down a direct path from picture to sculpture: Without form
break, without any other material, without changing methods, tools, without any formal
A caesura at which the image is on the way to becoming a sculpture - only three-dimensionally versatile
Object is located.
The otherwise usual relief from the transition from the 2nd dimension to the 3rd disappears
perfectly. The transition from a picture hanging on the wall to is seamless, so to speak
a sculpture standing in the room: The 2nd dimension of the one-sided surface in the 3rd dimension
of the all-round spatial body.
A picture can transform itself into a sculpture, a sculpture without any essence
change to the picture. In the picture is the sculpture and in the sculpture the picture.

Starting from the initial curvature of the picture carrier to more extensive vibrations, from the wall
taking off, up to the arch shape with stability in space.
First picture sculpture with a standing surface lifted from the floor in 1983 - about lifting and tilting - and the diagonal
thematized.
There are pictures that mutate into sculptures that turn away.

From this, Chuber developed the offensive "oblique" position and the stability of the sculptures
beyond physical perception - Diagonally standing object against gravity, respectively.
Invention: Diagonally standing object against gravity 1983 - which in 1987 led to the thesis of the
Negation of gravity or anti-gravity led:
Basic idea: If there is something that makes optical physics deviate from material physics,
differ, separate, there must be another force to gravity.

(On anti-gravity: "The Image of Science" from May 2012 by Rüdiger Vaas. "E.xtreme, exotic,
explosive - Does antimatter create antigravity? Physicists are about to find out - and have
already started with a new research area: antichemistry.)

Since approx. 2002 conceptual further development of the sculptures: which after falling over /
Fall back up on its own.

Curved pictures, pictures from above, painting from above; Online - Curved Painting 6 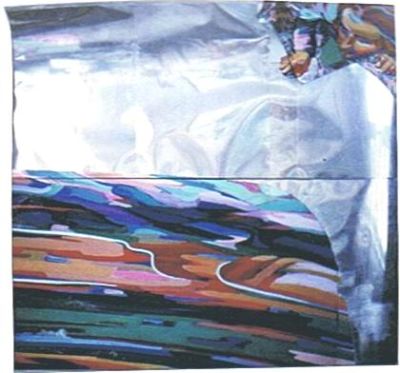 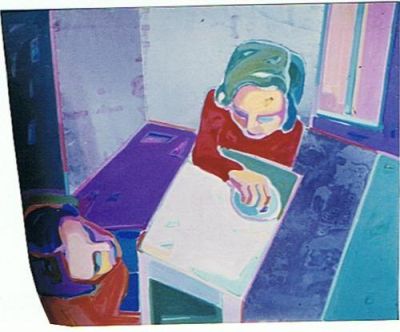 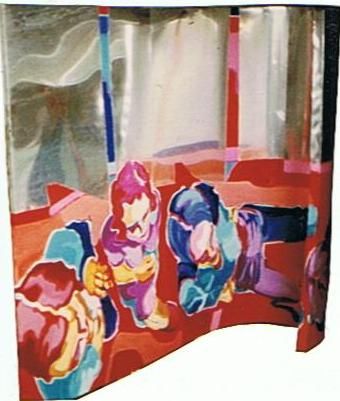 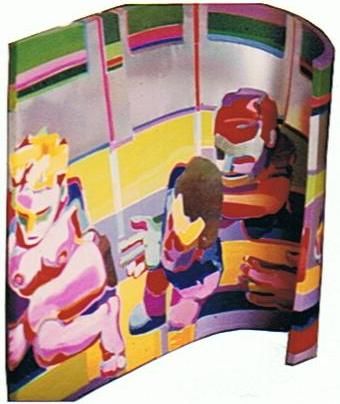 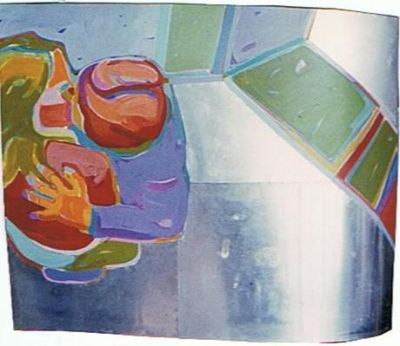 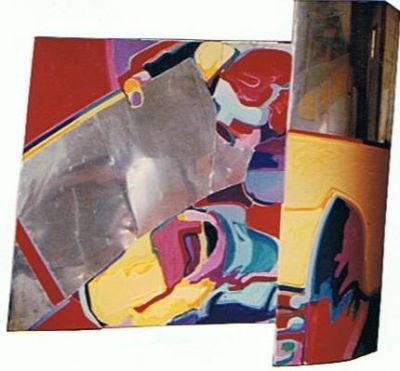 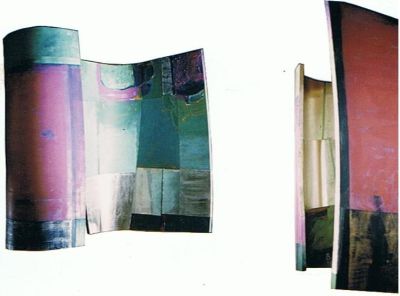 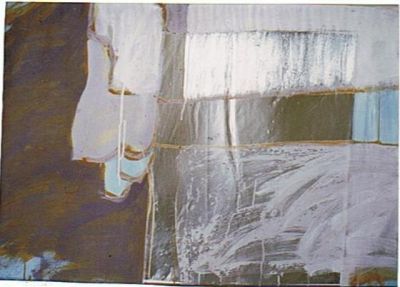 Girl after taking a Shower II 1983 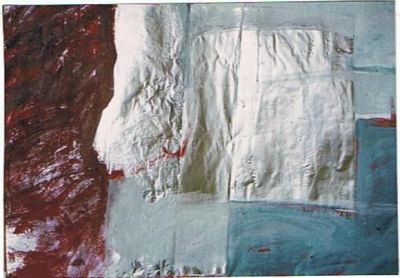 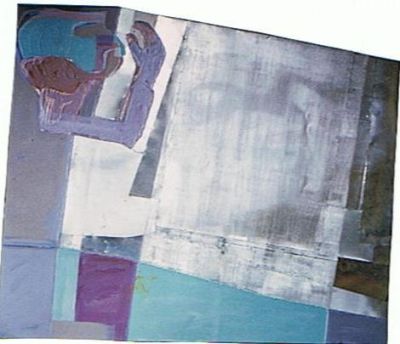 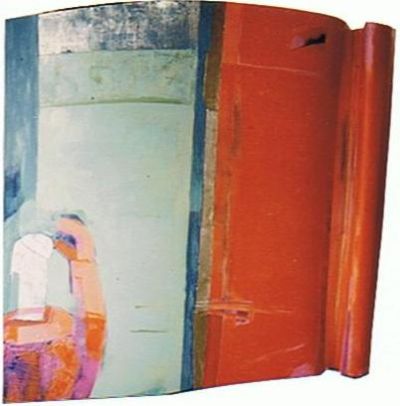 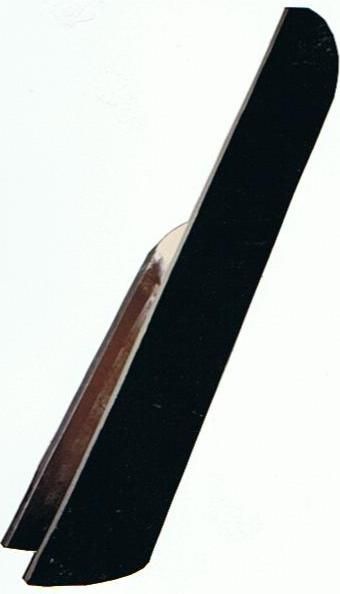 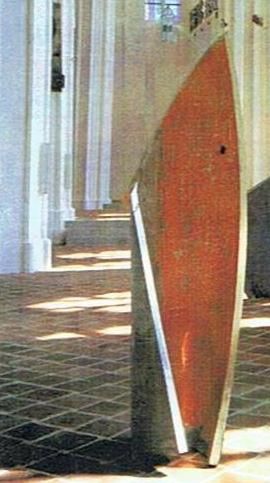 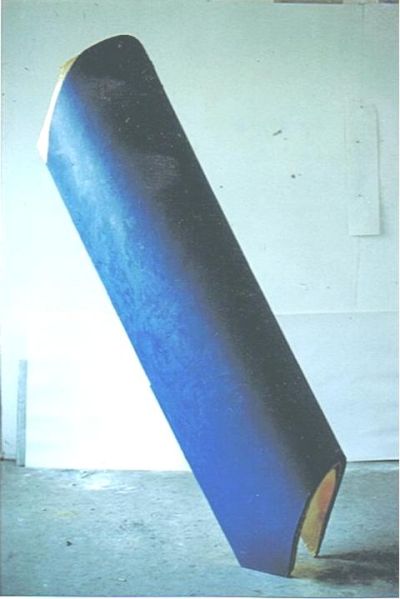 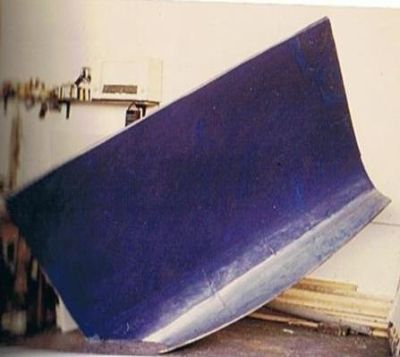 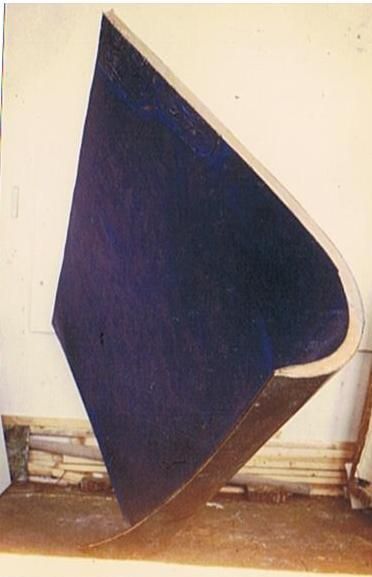 From this background of experience, the consideration of questioning the force of gravity arose. Formally, both the picture and the sculpture are based on the arch shape, (ZDFInfo 29.3.2013 cit: The most elementary of our forms: the arch) the bend and curvature, curve also wave (with the C at the beginning of the name, so to speak in the cradle, which already rests on arches.) or rainbow, the largest arch on earth. Even the Parthenon consists exclusively of convex, concave lines - arcs -, not a straight line.
This resulted in the structural credo of the “diagonals”, realized in sculptures and realizable in architecture: extremely sloping sculptures and sloping skyscrapers without anchoring in the floor. Henceforth artistically corresponding reflections on astrophysics and Stephen Hawking and his superstring theory “A Brief History of Time”. Unexpected confirmation of this sculptural perception through increasingly published astrophysical research results: "The universe is growing by 20 million km per minute. The galaxies are not moving, they are moving away through the total expansion of the cosmos - TV 7/24/2912.Until 1998 the astronomers assumed - ZDFNeo 14.9.2012 (2010) - that the expansion of the universe is slowing down ... through the study of the supernovae ... and the dark energy they came to the realization that it is accelerating; then from Cern and American institutes including Saul Pearlmutter since about 2005 on "dark matter" and "dark energy": They work on gravity (ZDF info 13.5.2013, "The black hole in the center of our galaxy has a diameter of 25 million km - our sun 1.4 million km" ) and cause the expansion of the universe, the divergence of the galaxies. Its dynamics increase, with the effect that gravity stagnates, but the expansion increases almost exponentially. TV-ZDFInfo, Nov. 2012, 7.40 p.m.: "Against the force of attraction / gravity, the universe expands faster and faster. Pearl Mutter - vacuum energy (empty space) / dark energy also counteracts gravity; it is present everywhere as the dominant energy; it increases when the universe expands";"Dark energy will exterminate the galaxies because it drives them apart more and more, to the point of invisibility"; "Stars pass, the universe becomes dark - after the hydrogen is used up".
This preponderance of dark energy is clearly expressed in the sculptural concept of the negation of gravity.
<?