Which are the lightest non-flammable gases

Which gases are lighter than air?

There are only a limited number of gases that are lighter than air; H. their molecular weight is less than 28.836 g / mol. These are the following 11 gases, 7 of which are flammable: 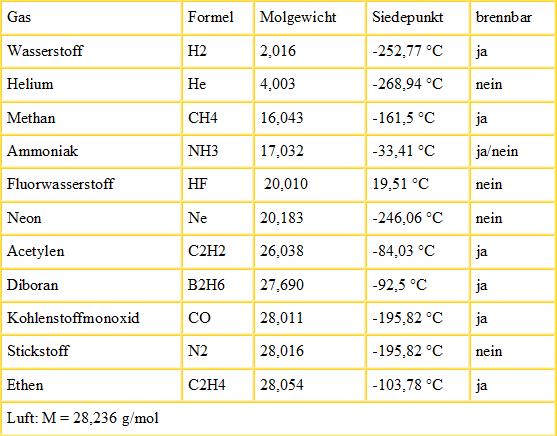 Ammonia has a special position. Due to its flame resistance and high LEL, ammonia is classified as "non-flammable" outdoors and when transporting dangerous goods. There is therefore no risk of explosion in these two cases, but it is a breath poison. In addition, it combines with the air humidity and is therefore heavier than air if it leaks in the open air.

In the case of hydrogen fluoride, normal room temperatures (HF)3-Complexes are formed, making the resulting gas heavier than air.

Of these 11 gases, the fire brigade is likely to encounter methane in the form of natural gas in NBC operations. Natural gas consists of 75 - 99% methane and a (natural) gas leak in buildings or lines in the open is one of the standard operations of the fire brigade. In addition, natural gas is being used more and more as a fuel in vehicles.

Biogas is becoming more and more important. Biogas (which, in addition to the biogas plant, can also be used as digester gas, e.g. in the sewage treatment plant or sewers) is a mixture of 45 - 75% methane (CH4), 25 - 55% carbon dioxide (CO2), 0 - 5% nitrogen (N2), 0 - 2% oxygen (O2), 0 - 1% hydrogen sulfide (H2S) and traces of other gases. Depending on its composition, biogas can be lighter, heavier or just as heavy as air. The system operator may be able to provide more precise information on the gas composition and behavior. Normally, biogas tends to separate after being released. Substances that are lighter than air float upwards, the other substances spread out on the ground.

All other explosive gases and gas mixtures are heavier than air.

The density of a gas is therefore proportional to the molar mass at the same temperature and pressure, i.e. for substances with a molar mass less than air (28.836 g / mol), the relative gas density is automatically less than one under the same ambient conditions

is an environmental and safety engineer (M.Sc.), district trainer for the fire brigade in NBC operations and NBC specialist advisor in fire and disaster control. His focus is on security measures. He is pleased to be able to support Andre Schild in his commitment to a better level of education in the ABC area.