You can control your own decisions 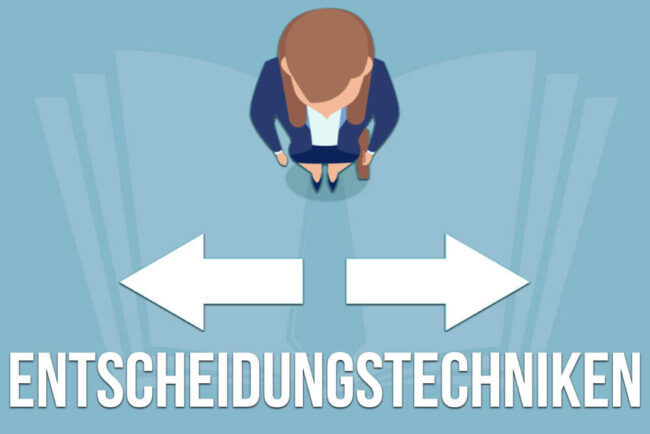 When are decision-making techniques useful?

Often mentioned for decisions: Be spontaneous and just do it. This is not only well-intentioned, it is helpful and absolutely necessary in many situations. The abundance of daily decisions alone makes it essential to listen to your gut and your own intuition and decide on an option.

But is that how you want to make the big, important decisions? When something is going to have a big impact on your life and the future, it shouldn't be a door and angel decision. A new job, buying a house, moving to another city - do you really want to rely on the first feeling without thinking about it?

This is exactly where decision-making techniques come into play. You greatly reduce the risk of a bad decision. With targeted methods, hasty and careless decisions are not made, but well-founded decisions are made that will not be regretted in retrospect.

Overview of the most important decision-making techniques

In fact, there are numerous techniques, methods, and procedures for making better decisions, making difficult voting processes more accessible, or simply choosing the best alternative in a situation. But which decision-making technique should you use? You should make this choice depending on your expectations and the individual situation.

With a ready-made solution, in which only the missing variables are inserted, it is not done. Decision-making techniques have individual advantages, but also catches and stumbling blocks. You cannot avoid getting to know the most important (but sometimes contradicting) decision-making techniques - and then choosing which one fits the question at hand.

Personal favorites will undoubtedly emerge, others may only serve as a source of inspiration and you will develop your own methods from them. You should definitely know these 12 decision-making techniques:

Now you know a whole range of different techniques, methods and tricks, all of which are suitable in one way or another to make a decision, to consolidate it or at least to narrow down the alternatives and to come to a solution through a process of elimination. The catch: You have to choose - exactly - again between all the alternatives. So what to do

Break down your decisions into three basic categories:

Using these three criteria, each decision-making situation can be precisely classified and combined with a suitable technology. For example, choosing a course of study would be a rational decision with a long-term horizon for which there is a lot of information (with a little effort). For example, a decision tree or a Benjamin Franklin list would be available to limit the large selection and then the time travel method to validate the selection.

Finally, we have put together a few tips with which you can use the decision-making techniques correctly and achieve the best possible result:

What other readers have read about it