What do Royal Marines do

The Royal Marines or Marine infantry are soldiers who serve as combat troops on ships of the British Royal Navy. You will also be entrusted with guarding buildings, ships and port facilities.

On the ships of the Royal Navy, Royal Marines are used as gun crews, but they are also used both for fighting on board on enemy ships and for defending their own ship. They also serve as land combat troops that enter enemy territory and fight the enemy's troops there. They also have the task of maintaining discipline and order on board and of supporting the officers in the event of a mutiny. 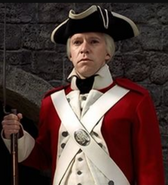