Review of the Huawei Honor 8

LTE newcomer with dual SIM and dual camera under the microscope

October 2016: Honor is a subsidiary brand of the well-known smartphone manufacturer Huawei, which targets a rather price-conscious clientele with its devices and has been releasing devices with high-quality and fast hardware at low prices for some time. The main brand Huawei has been concentrating on the premium segment for a long time and has presented a smartphone with very high-quality workmanship in this area with the P9. 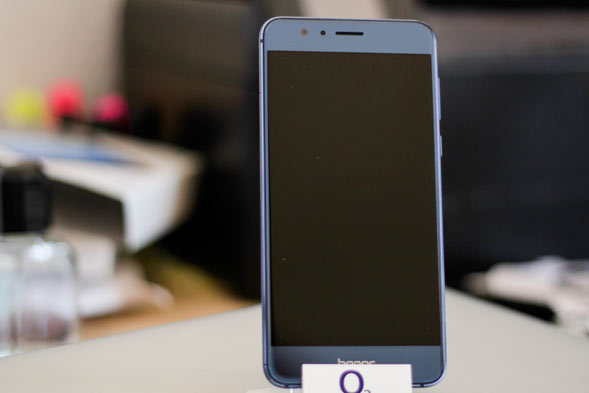 The Honor 8 can definitely be seen as a little brother, as many specifications are similar or the same. As with the P9 from Huawei, a dual camera is also built into this mobile phone, which has a resolution of 12 megapixels and is also supposed to take very good photos. No less interesting is the fact that the dual SIM functionality and LTE radio have also been built in here. Does the smartphone have what it takes to become an LTE insider tip?

When we unpacked the device, we found a smartphone that felt very high quality. Unlike the P9, no metal, but mainly glass, was used as a building material. Like its sister model, the Honor 8 creates the premium feeling. However, there is a major difference to the P9: If you don't use the Honor smartphone in a case, you should always have a polishing cloth with you at the same time, since the back of the glass and the display are a magnet for fingerprints and lose some of their beauty after just a few touches.

When unpacking the device, we found the usual accessories, including the data cable, socket adapter and headphones and a SIM card slot opener. Too bad: a display film was not included. Here, Huawei could have saved the customer an inconvenience by pre-gluing a robust display film. Since the Honor's charging socket is based on USB-C, old charging cables can no longer be used without further ado. The included headphones make a rather cheaper impression and sounded average to muffled in the test.

The smartphone does not have to shy away from a comparison with dominant flagships from other manufacturers. The straight shape with the rounded corners is initially reminiscent of more recent Apple devices of the 6th generation, the feeling when holding the honor is more like the Galaxy S6 or Galaxy S7. What is striking is the dual camera and the fingerprint sensor on the back, which quickly and reliably recognizes fingerprints from different perspectives. At the top you can discover another subtle detail. The little red point is an infrared port, which is not used for file transfer, but for remote control of televisions and other devices.

A HiSilicon Kirin 950 Octacore CPU works inside the Honor 8. This processor with its 8 cores clocks at up to 2.3 GHz and is supported by a Mali-T880 MP4 GPU. 4 GB of RAM provide the necessary memory reserves. These enormous power reserves were particularly noticeable in the test: no jerking was noticeable during the test period. The device warmed up a bit when processing intensive tasks, but the performance remained consistently fast. 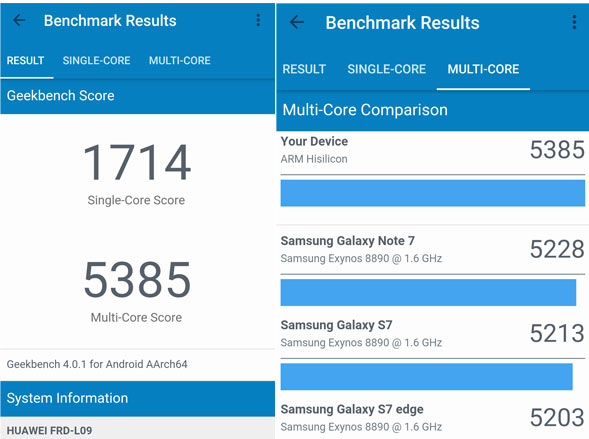 The screen of the Honor 8 has a diagonal of 5.2 inches and has a full HD resolution, i.e. 1920x 1080 pixels. As with the sister model P9, this results in a pixel density of 423 ppi. The fact that a higher resolution, such as Quad-HD, was not used here is probably due to the fact that a higher resolution also consumes more power. Despite Full HD, the screen shows content clearly and no longer shows individual pixels. Unlike the sister model Huawei P9, the Honor 8 does not use an IPS panel. Instead, a screen technology called LTPS (low temperature poly silicon) is used here. This is a further development of TFT display technology, which is more likely to be built into entry-level smartphones. Compared to TFTs, smartphones with LTPS panels offer improved contrasts and higher resolution. We were able to confirm this on the test device, but the display quickly lost legibility in bright sunlight. Nevertheless, the Honor's screen convinces with a good display.

The internal memory of 32 GB is advantageous for the end user. At least in the medium term, this frees you from a lack of space. If this is not enough, you can insert a memory card, but you have to do without the second SIM. Music can be played via the jack connection, Bluetooth or the built-in loudspeaker, which came up with a good sound in the test.

What is striking about the Honor 8 is without a doubt the dual camera, which can take photos with two sensors with 12 megapixels each. This feature has become more well-known in terms of dimensions since the release of the iPhone 7 Plus, which comes up with the same specification. The camera technology built into the Honor has, in addition to two camera sensors, a dual LED flash, which is supposed to provide a better color display with two different colors.


In addition, a wide aperture of f / 2.2 is available in low light situations. The camera app started very quickly in the test and took good pictures in daylight. In particular, the low loss of quality (for subjects in daylight) when zooming was positive here.

During the night, the results were sometimes different: While the camera was able to handle subjects at night in its normal state, zoomed in photos were often very pixelated and noisy. The flash illuminates a dark situation rather poorly. 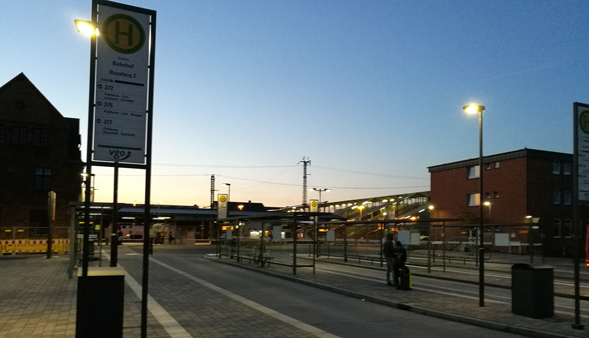 An 8 megapixel camera is available at the front for front shots. According to the manufacturer, the sensor has been specially optimized for selfies in dark situations. For this purpose, the pixels were enlarged and an aperture with the opening f / 2.4 was installed. In addition, the display lights up brightly for a few seconds when the trigger is triggered. In principle, zooming is not possible with the front camera. 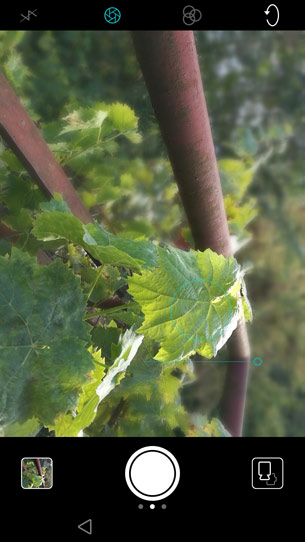 Video recordings are made in full HD resolution on both sides. Interesting: A follow-focus function is available for moving objects, which fixes the autofocus on a specific target and continuously focuses on it if it continues to move. This worked rather moderately in the test. The videos recorded by the smartphone were still of good quality.

Numerous wireless standards are built into the Honor 8, which connect the smartphone to wireless networks. Among them are WLAN according to a / b / g / n / ac, Bluetooth version 4.2, GPS, NFC and infrared for controlling televisions. The device supports LTE according to LTE Cat 6, which means that download rates of up to 300 Mbit / s are possible.

The Honor 8 also supports VoLTE, assuming the appropriate tariff and network availability. In several speed tests in the Telefonica Netz we got mixed results, from underground 0.94 Mbit / s up to 35 Mbit / s in the download, while a speed test with the second test card in the network of the Deutsche Telekom delivered constant values ​​over 10 Mbit / s on site . Replacing the two SIM cards in their slots produced similar results. The dual SIM function can only be used if no memory card is inserted. It should be mentioned that only one SIM can log into the LTE network, the other transmits at the same time in the GSM network of the respective provider.

Several WLAN tests often produced speeds of up to 70 Mbit / s net, which were achieved when testing with the network of the University of Marburg. The “Navi test” on the bike was also satisfactory: the Honor 8 cuts a fine figure when using Bluetooth (via a headset for voice instructions), GPS for location and LTE / 3G in hilly surroundings at the same time. Continuous navigation was possible without any problems; the device quickly noticed a spontaneous route deviation and corrected the route. Overall, the cell phone cuts a fine figure in everyday use.

Nevertheless, when the phone is heavily used, it is sometimes necessary to take a look at the battery level, since, as with all smartphones, high activity of the wireless modules drains the built-in battery relatively quickly. The non-exchangeable battery built into the Honor has a capacity of 3000 mAh. Settings and options for saving energy can be viewed via the battery manager. In order to tease out a few percent runtime, there are several settings to choose from, such as lowering the screen brightness or restricting the processor performance. In addition, the program monitors energy-intensive apps and offers to switch them off. The setting to reduce the screen resolution as well as the screen brightness is surprising. As with Samsung, there is an ultra mode, which only allows the execution of the basic functions, but is supposed to achieve a very long runtime.

If you are thinking of getting a smartphone with a dual camera, but don't have the necessary change for the Huawei P9 or iPhone 7 Plus, the Honor 8 is a suitable alternative. One cannot speak of a cheap smartphone here, rather the Honor can be understood as an alternative for those who do not want to spend that much money or who do not like the metalworking of the P9 or iPhone 7 Plus. The glass housing of the Honor gives a high-quality impression, the operating system is up-to-date with Android 6 and the performance is also in the upper range. Only the memory card, which sacrifices the dual SIM functionality and the ability to quickly collect fingerprints, spoil the impression a little. Otherwise, you can get a well-equipped and recommendable device for 400 euros. The Honor 8 is available in stores in the colors Midnight Black, Pearl White or Saphire Blue.

All information and tariffs on this website are to the best of our knowledge and according to
careful research. However, we do not guarantee correctness and completeness! © LTE-Anbieter.info
Yes, this website also uses cookies. Everything about data protection
✖
<?