What is Fate Stay Night about

The Fate universe has received numerous anime adaptations in recent years. Probably the most famous Fate series Fate / Stay Night be. But even this Fate series seems confusing at first glance. In this post I would like to explain to you how the different Fate versions are related and what you can do for the cinema release of the Fate / Stay Night Heaven's Feel-Movies must know.

As the various Fate routes are shed light on, this post contains massive spoiler.

In order to even understand why there are multiple routes in Fate, the term Type moon be explained. Type-Moon was founded in 1998 by the illustrator Takashi Takeuchi and the writer Kinoko Nasu. Her first work was Kara no Kyōkai - the Garden of sinners, a light novel series that was initially distributed over the Internet. The story was first published as a book in 2004 and 2007. Originally, Type Moon was a Dōjin Circle (Fanzirkel), but in 2003 it was renamed into a company Y.K. Notes (有限会社 ノ ー ツ, Yūgen-gaisha Nōtsu) passed. Type-Moon has been the company's brand ever since.

The first commercial project of the newly founded company was Fate / Stay Night in 2014. The project included a visual novel game that featured the character Shirou Emiya follows. In the course of the game there are three different storylines (routes): Fate, Unlimited Blade Works and Heaven's Feel, which are all unlocked one after the other and each have a different heroine (Saber, Rin Tohsaka or Sakura Matou) in focus and differ in the storyline .

Fate / Zero - the start of the story Edit source] 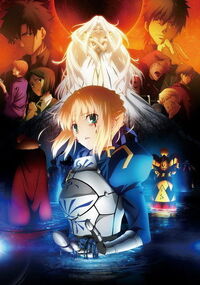 Fate / Zero tells the story of the fourth war for the Holy Grail. The anime sheds light on the prehistory too all three routes and should therefore be seen first. In war, masters, magic users and servants (fallen hero-spirits who are summoned for war by a master) fight against each other to receive the holy grail, which grants the winner a wish. After the summoning, the master and servant conclude a contract and the master receives three command spells with which he can force his servant to do anything.

It is not just a simple battle between the different parties, but also a battle for one's own ideals, not only between the different fronts, but also between the masters and the servants. This is shown very clearly by Master Kiritsugu Emiya, who is known as the magician killer, and his Servant Saber, who is the heroic spirit of Arthur Pendragon. Kiritsugu's goal is to end all wars and ensure peace in the world. No trick is too dirty for him, since in his opinion the price of peace cannot be high enough. Saber, on the other hand, wants to use the holy grail to travel back in time and thus prevent her from becoming Queen of Britania and thus leading her country to calamity. Chivalry and honor are the most important ideals for her, which she also expects from her master and her opponent.

The various ideals are a focus topic of the anime because the meanings of war, hero and honor are so different for the two and this conflict cannot be resolved simply by words. Additionally, the other masters and servants force them to question their ideals and pit their resolve against each other. And in the end, the Grail itself is a nasty surprise, as the desire for it brings about the end of humanity, making all of their deeds, all of their sufferings, and all of their sacrifices meaningless.

What Rin does not realize is that Shirou Emiya, Kiritsugu Emiya's adopted son, is following this fight. Since there is a rule that there can be no human witnesses to the war, Lancer pursues Shirou and stabs him. Rin uses her magic to save his life. When Shirou is attacked a second time by Lancer, she summons the Servant Saber for him, who strikes back Lancer. From here on it differs Fate / Stay Night from the other two versions.

Following this, Saber fights Archer, assuming that he and Rin are their enemies. From this point on, the different Fate routes differ as they take place in different parallel universes. Parallel universes naturally arise when a small change occurs, or a decision is made, or an action is taken that causes a variance in the way things turn out.

The Fate / Stay Night Anime is the only one on this list that was not produced by ufotable studio. Instead, this anime was implemented by Studio Deen. In this route, called "Fate", Saber manages to critically injure Archer with her attack. This makes Rin and Shirou (who are forging an alliance) dependent on Saber, as only she can defend them against the other serveants. However, Shirou's training as a magician is incomplete, so he cannot support Saber and she becomes weaker with every fight.

Eventually Archer has to sacrifice himself when they meet Kiritsugu's daughter Illyasviel von Einzbern (Ilya for short). She came to kill Shirou because her father never returned after the fourth war for the holy grail with her servant Berserker (whose true identity is Hercules). Saber, Shirou and Rin manage to kill berserkers together and then take Ilya into their care.

As the war progresses and the majority of the other serveants are killed, Gilgamesh comes into the spotlight and the final battle becomes a repeat of the fourth Grail War that took place in Fate / Zero took place. Saber faces the King of Heroes again, while Shirou, like his father, has to fight Kirei Kotomine. In the end they destroy the Grail and the world will be saved and the survivors live happily on.

The focus of Fate / Stay Night lies on Shirou and Saber and how they deal with their ideals in the course of the challenges. Shirou's desire to be a hero is given a foundation on which to stand for the future. Meanwhile, Saber comes to terms with her past and accepts her death instead of following a desire to use the Grail and save her kingdom. Shirou falls in love with Saber but this love ends tragically: When the war is over, the two are separated. 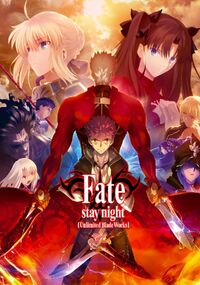 The anime Fate / Stay Night Unlimited Blade Works is the first adaptation of one of the three routes by the animation studio ufotable. The heroine of this route is Rin Tohsaka and her Servant Archer. However, she again forges an alliance with Shirou and Saber in order to find the master of Rider, who is up to mischief at her school. Archer cannot befriend Shirou because he does not live up to his ideals and Rin has to use a command spell to prevent him from harming Shirou.

Rin moves into Shirou's house in order to be able to work better with him and to protect him. The two go on a date the next day and from there on romantic feelings develop between the two.

As the war progresses, Archer betrays Rin and allies with Caster, another serveant. Lancer offers to help them and together with him and Saber they try to defeat Caster and Archer. However, in the confrontation, Archer kills Caster's master and her, revealing that he was only faking his loyalty to pursue his true goal: to kill Shirou. He reveals that he is his version of Shirou from the future. He is about to kill Saber when Rin signs a contract with Saber and Saber regains his strength. Archer then kidnaps Rin, and Shirou and Saber set out to save her.

Gilgamesh also appears in UBW towards the end of the war, after he was just able to defeat Berserker with his Noble Phantasm. Saber, Shirou and Rin then make their way to Gilgamesh to defeat him and decide the war. Rin and Shirou form a pact that provides Shirou with parts of Rin's mana. Shirou uses the Reality Marble, the Noble Phantasm from Archer, who is Shirou from the future, and fights against Gilgamesh. Shirou can defeat him with his version of Unlimited Blade Works and Gilgamesh disappears within the Grail, but he can drag Shirou with him and tries to escape from the Grail. Then Archer appears one last time, helps Rin escape from the Grail and kills Gilgamesh with an arrow in the head. Saber then destroys the Grail with Excalibur, as she was forced to do so by Rin with a command spell.

The route has a lot of character development and gives a lot of insights into Shirou. The anime has a happy ending and shows that Shirou and Rin become a couple. Rin continues her studies at a magic school and Shirou accompanies her there. The route shows the conflicts of Shirou's ideals that made his future self Archer.

Heaven's Feel is the last and most detailed route from Fate / stay night. The route will be implemented in three cinema films by the ufotable studio. The first part will be shown in Germany on June 21 and 24, 2018. The other two films have not yet been released. The heroine of the route is Sakura Matou and her servant rider.

The route is the longest and most complex route in the visual novel and includes most of the background knowledge about the war for the holy grail. The route reveals many secrets that were not present in the previous routes. Also, the route is more focused on the Masters Shirou, Rin, Sakura and Illya and their relationship to the previous holy grail war. This course of action is also the “darkest” version of the three.

As an anime viewer, you should Fate / Zero begin, since the prehistory, the fourth Grail War, is told there. Then you should Fate / Stay Night Unlimited Blade Works look. Please note that the anime was written by someone other than Fate / Zero and therefore has a different focus. It is therefore best not to view this anime as a direct sequel. It should also be noted that characters who fall short are most likely more important in other routes and receive more depth there. After that, the Heaven's Feels-Films can be watched as these films require prior knowledge.

As a newcomer, I recommend that you not watch the adaptations by Studio Deen, as these sometimes spoil other routes and simply leave out many moments completely. It is best to watch the implementation of ufotable and / or read the visual novels.

Rain has been part of the Content volunteer teams on fandom. He is a huge anime and Disney fan and always follows the anime of the current season. So it's only natural that he should write about anime. If he has the time, he sets up new wikis or helps existing wikis with their design and construction. In addition, he is still active as an admin in the Disney and Attack on Titan wiki.
<?