Can I stop the hearing loss from progressing?

Otosclerosis(Otospongiosis): Stiffening of the ossicles, v. a. of the stapes at the transition to the inner ear.

As a result of a local mineral metabolism disorder, the ossicular chain ossifies and becomes increasingly immobile. The consequence is an increasing conductive hearing loss up to deafness. Timely surgery can prevent this.

When to the doctor

The same day if

In the next Days, at

An increasing ossification of the ossicular chain due to a local mineral metabolism disorder is characteristic of otosclerosis. The associated immobility of the auditory ossicles impairs sound conduction and the ability to hear is steadily decreasing.

Otosclerosis usually begins in one ear with slowly increasing hearing loss, later in around 70% of all cases both ears are affected, but mostly to different degrees. Noticeable symptoms are noises in the ears such as humming or humming, i.e. deep-sounding tinnitus noises.

However, there are also numerous symptom-free processes: Ossification can be detected in every hundredth person, but the majority of those affected never experience the typical symptoms.

The disease is most common between the ages of 20 and 50 and affects around twice as many women as men.

The exact causes of the disease have not yet been clarified. A local infection with the measles virus is discussed as a triggering factor. The disease is partly hereditary. Furthermore, hormonal changes (e.g. during pregnancy or when taking the pill) cause a relapsing worsening of otosclerosis.

The doctor confirms the diagnosis after inspecting the eardrum with the ear microscope using various hearing tests that provide a characteristic overall picture. So shows z. B. in the tone audiogram typically a disturbed sound conduction in the medium to high frequency range and in the speech audiogram a limited speech understanding.

Gellé experiment. The Gellé experiment is specifically used to detect an immobile ossicular chain: the doctor places a struck tuning fork on the center of the skull and at the same time increases the pressure in the auditory canal of the affected ear with the help of a balloon. In healthy people, this overpressure restricts the mobility of the ossicles, so that the sound becomes quieter. If the patient still hears it with unchanged strength, this indicates a stiffened ossicular chain.

Imaging procedures.CT or MRI examinations confirm the diagnosis and show how far the otosclerosis has progressed. 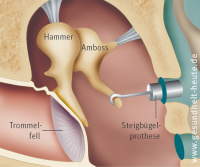 A stiffened ossicular chain can be restarted with a stirrup prosthesis. A small incision in the eardrum is enough for the surgeon to get into the middle ear and work there under microscopic magnification. The operation succeeds in 90% of the cases.
Georg Thieme Verlag, Stuttgart

A causal treatment of otosclerosis is not yet known, but the resulting hearing loss can be successfully reduced by an operation. The surgeon partially or completely replaces the stirrups with one Stapes prosthesis (Stapesplastik) so that the sound can be passed on again. The procedure can be performed under local or general anesthesia and usually involves a short stay in hospital (3–5 days).

Instead of surgery, the doctor can also fit a hearing aid to improve hearing.

The most common complication is dizziness caused by an ill-fitting implant.

Approximately 4–6 weeks after the operation, the prosthesis has completely grown in and the hearing ability usually improves significantly.

There are a number of precautions you need to follow after ear surgery: Your doctor will tell you how long no water in the ear canal may penetrate. If he has already removed the ear tamponade, you can rub a large piece of cotton wool with Bepanthen ointment before showering and place it under a shower cap in front of the entrance to the ear canal. Caution, the cotton wool must not be pushed into the ear canal. Please clarify with your doctor whether you are allowed to swim.

Avoid nicotine for optimal wound healing. Blowing your nose If it is forbidden for 4 weeks, you will have to sneeze, be sure to open your mouth. Avoid lying on the operated ear when sleeping.

The recommendations for air travel vary. However, it is better to avoid air travel for the first 4 weeks after the operation. To be on the safe side, you should refrain from exercising and going to the sauna for 6 weeks.

Note: Pain medication containing acetylsalicylic acid increases the risk of rebleeding - they are therefore prohibited for the first 10 days after the operation.

Important note: This article has been written according to scientific standards and has been checked by medical professionals. The information communicated in this article can in no way replace professional advice in your pharmacy. The content cannot and must not be used to make independent diagnoses or to start therapy.
<?