Why is gasoline used for transportation?

Gas stations with their gas pumps are on many streets. They sell gasoline and diesel. In the past you were served there, now everyone fills the tank themselves. 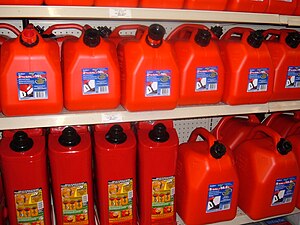 Canisters are suitable for transporting gasoline on boats or in remote locations. They must be made of a special plastic, otherwise the gasoline will eat holes in them.

Gasoline is the fuel for cars and other machines. It is a mixture of over 150 different parts and is made from crude oil in the refinery. There are many different types of gasoline. Aviation fuel, for example, is even stronger than car fuel.

Petrol must match the engine in question. The octane number is therefore written on the fuel pump. This is a measure of the quality of the gasoline. If the octane is too low, the engine will knock and be damaged. In the past, lead was added to gasoline to prevent the engine from knocking. This is forbidden today because it makes the exhaust gases toxic. In addition, lead in gasoline would damage the catalytic converter in the exhaust. The catalytic converter is a thickening in the exhaust that is coated on the inside with a special metal. This serves as an afterburner and makes most of the toxic exhaust gases harmless.

Gasoline should have as little impact on the environment as possible. The factories must therefore also ensure that the gasoline contains little sulfur and other pollutants. They also flow out of the exhaust. They harm animals and plants. They also erode the facades of buildings.

In some countries, vegetable oil is now mixed with gasoline. So it needs less oil. This makes gasoline more environmentally friendly, but it requires a lot of arable land. This is then no longer available for the production of food.

Diesel is not to be confused with gasoline. You can also tap it at the petrol pump. However, diesel engines work differently than gasoline engines. The nozzle for diesel is thicker so it does not fit in gasoline cars. That is why you have to be careful not to accidentally fill up with gasoline with the diesel car.

Why is the fuel called gasoline?

Many people think that it is named after Carl Benz, who invented the car at the end of the 19th century. However, this is not the case. The word is derived from benzoin. This is the name of the resin from a particular tree in Asia. The acid from this resin was used to produce the liquid benzene, which is still found in today's gasoline.

In other languages, gasoline is sometimes called differently. In American English one says something like "gasoline". The terms "gas" and "oil" can be recognized here.