How did King Solomon summon demons 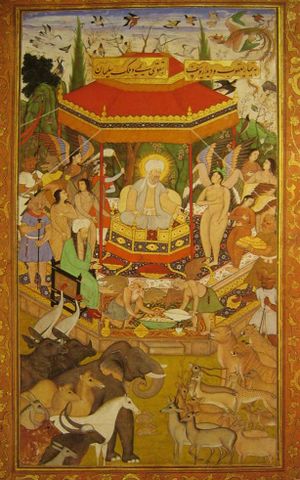 Solomon as ruler among the demons devoted to him, Persian miniature, 17th century

King Solomon (Hebrew SchlomoAccording to biblical tradition, it ruled from around 965 to 926 B.C. about Israel and Judah. A modification of the Old Testament myth can be found in the "Testamentum Salomonis" (between 100-400 AD). Accordingly, the wise King Solomon received lordship over some spirits as a reward for his services to God. These enabled knowledge, power, and wealth to be accumulated for the greater glory of God.

There are numerous legends about Solomon in the Talmud and the Koran. In the Arabian Nights, Solomon (Sulaiman, Soliman, Suleyman) is represented as the epitome of wisdom who commands people, animals and spirits. He is the master of the demons he locks up in bottles. Even the devil Iblis is temporarily captured by him. In Islamic tradition he rules over the demons, the jinn (from Arabic junna, "to be possessed"), whom he ordered to fetch treasures from the sea and to build the temple of Qud. The Koran, whose legends about Solomon were taken from Jewish commentaries, reports: "We gave (so speaks God) to David and Solomon science. Solomon is David's heir, and he said to the people: 'I have the language of birds, and all things are given to me; and hosts of spirits, men and birds, have gathered around the prophet who is leading them away. '"[1]

In the Ars Goetia (the first part of the Grimoire from the 17th century, the Lemegeton Clavicula Salomonis or Key Solomons) there are descriptions of the 72 demons that King Solomon conjured up and locked in a bronze vessel. The text gives instructions on how a similar bronze vessel can be made and the formulas needed to summon these demons. The formulas described differ from other Goetic texts in that the evoked entities are not asked for their favor, but are forced into obedience.

A revised English edition of the Ars Goetia was published by Aleister Crowley in 1904.