Can gulls be your pet?

Again and again the dispute flares up about a group of birds that belong to the "local color", but which is sometimes perceived as an annoying companion: seagulls. Fears range from noise pollution to the spread of pathogens. In reality there is little to it. 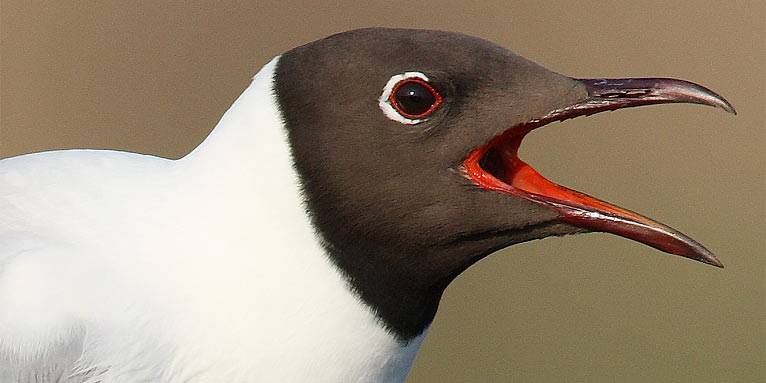 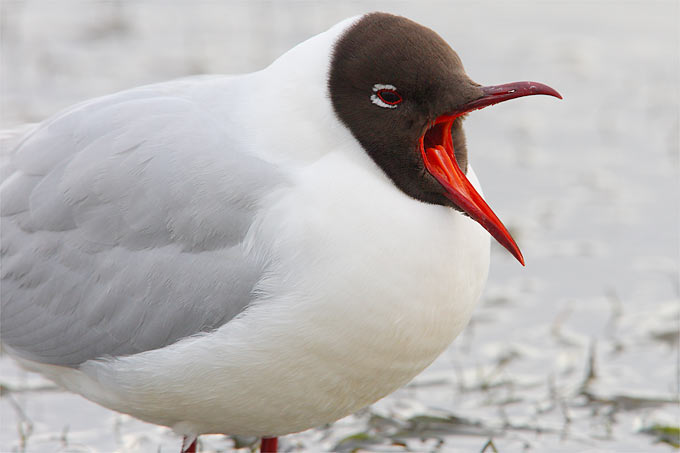 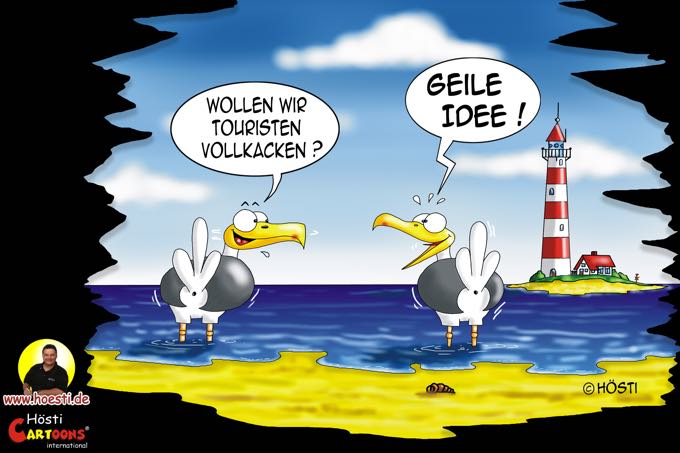 You can also see it in a humorous way - seagulls are not only a cause for annoyance (Courtesy: www.hoesti.de)

On the coasts of the North and Baltic Seas, the dispute over a group of birds flares up again and again, which like no other belongs to the "local color" of the beaches, dunes and harbors, but also of the large inland lakes and rivers in the land between the seas: our seagulls . The American Richard Bach created a literary memorial for them in 1970 with his "Seagull Jonathan" and Christian Morgenstern claimed that they all looked as if their name was 'Emma'. 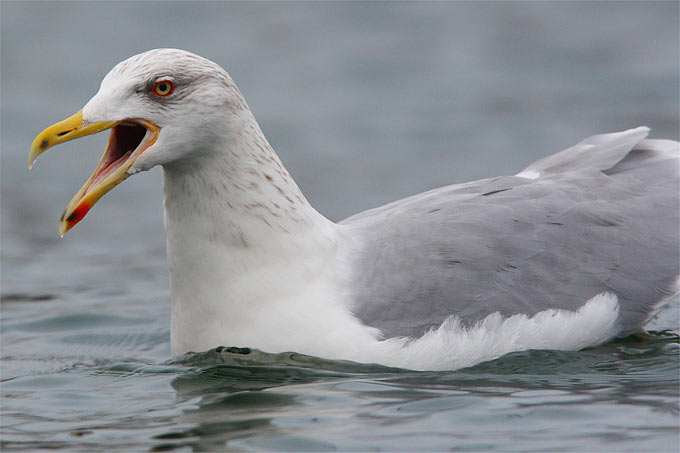 No postcard stand without a seagull motif, no souvenir shop without a seagull sculpture - there is no other animal species that we associate so clearly with the sound of the sea and maritime life. However, some locals and some holidaymakers tend to perceive the seagulls as annoying companions. Residents complain about alleged noise pollution and fear dangerous attacks or the spread of pathogens such as salmonella. Partly hysterical media reports à la Alfred Hitchkock's “The Birds” fuel this mood unnecessarily; fearful fellow human beings feel their prejudices confirmed by the curious and energetic demeanor of the birds, which usually appear in groups and flocks. But reality looks different.

Not all seagulls are alike
Important in advance: There is no such thing as 'the' seagull. There are ten species of gulls in Schleswig-Holstein that breed here or migrate to us in different numbers as migratory birds in autumn, winter and spring. The term "sku", which is occasionally used synonymously for seagulls, relates to a different group of birds that live mostly parasitically and predatory in polar regions in the systematics of biology. Applying this term to seagulls in general is therefore wrong from a zoological point of view.

The following descriptions refer to old breeding birds in summer plumage. These are still quite easy to distinguish from one another. For the identification of young birds, which are usually brown or piebald in color, also only show their old clothes for a period of several years and are more difficult to differentiate between species, NABU refers to more specific literature or to participation in NABU excursions with experienced ones Bird connoisseurs. And don't be shy - even for experienced bird watchers, identifying the different species in their age stages is sometimes a challenge.

Black-headed gull
With its dark brown head and small size, the black-headed gull can hardly be confused with any other species. It is the classic inland gull, but a few years ago it also colonized the west coast of Schleswig-Holstein. Their colonies are mostly on protected islands. The adaptation to humans observed in other species through z. B. the use of buildings as breeding grounds is not known of black-headed gulls.

Common gull
The common gull is the classic species on our Baltic coast. Some pairs also breed inland. In recent years, common gulls have discovered the flat roofs of buildings near the coast as a breeding ground, where they are safe from the predatory mammals that mostly live on the ground. Most pairs still breed in larger colonies in protected areas on the ground. The common gull looks like a small herring gull. However, it lacks the typical red spot on the herring gull's otherwise yellow beak. 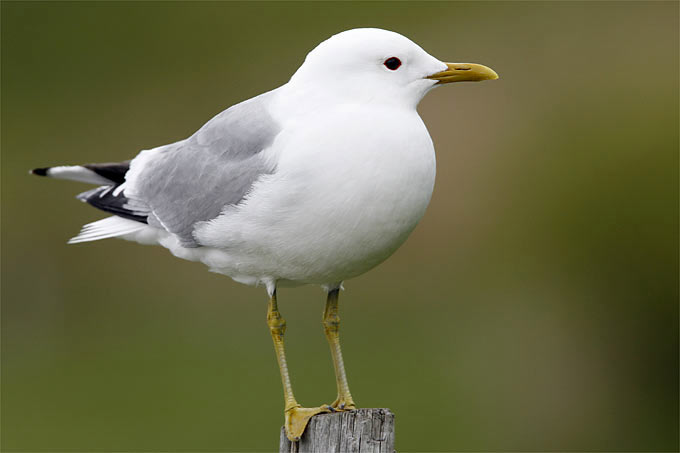 herring gull
The herring gull is widespread in Germany and occurs on the East and North Sea coasts as well as inland, where it can form colonies rich in individuals. It is larger than the first two species and has a strong yellow bill with a red blotch near the tip. Herring gulls have also started populating the roofs of suitable buildings in some places.

More species of seagulls
We also breed the black-headed gull (especially on some islands in the Wadden Sea), the black-headed gull (single pairs especially inland) and the black-headed gull (our largest species of gull, like the black-winged gull with dark wing-coverts, breeding in single pairs on the Baltic Sea in large herring gull colonies ) on. Their population is significantly smaller than that of the 'classic' breeding birds - because of their smaller population, they are hardly significant. As an exception, the rare little gull, which is more reminiscent of terns in its behavior, has also bred here. The migration of the little gull, appearing in larger flocks, on their way to and from the Baltic States is one of the most spectacular events for bird lovers in Schleswig-Holstein. The steppe gull - also a smaller number of breeding birds in Schleswig-Holstein - has only been differentiated from the herring gull for a few years. Only on Heligoland does the kittiwake occur as a rock breeder, but there with several thousand breeding pairs. The ice gull appears as an occasional winter visitor from breeding areas far to the north on our coasts. 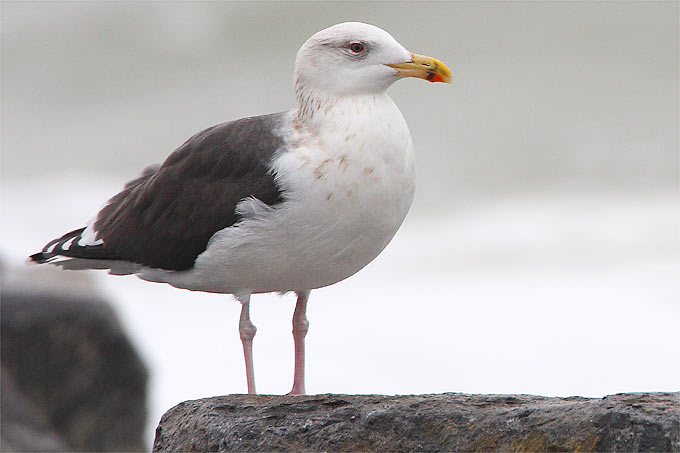 All species undertake more or less long migrations. Among the seagulls that can be found here in winter are mainly animals from the wider Baltic Sea area. After finding ringed animals, our seagulls, which breed in Schleswig-Holstein, spend the winter in large numbers on the North Sea coast of Denmark to the north of France. Some also migrate inland along the major rivers. Only the black-backed gull spends most of the winter on the coast of West Africa and in the Mediterranean region.

The populations of our common seagull species have been declining for several years. A significant decline in grassland - this is where the black-headed and common gulls look for food - but also changes in fishing and the closing of rubbish dumps, where the seagulls used to survive the cold season, are decisive reasons for this in some cases drastic decline. Seagulls are not picky about what to eat for food. Originally they lived mainly on edible flotsam, only rarely do they hunt larger animals themselves. Their ecological role is to 'clean up'. Their food is mainly earthworms, insects and mice on grassland and freshly plowed fields. 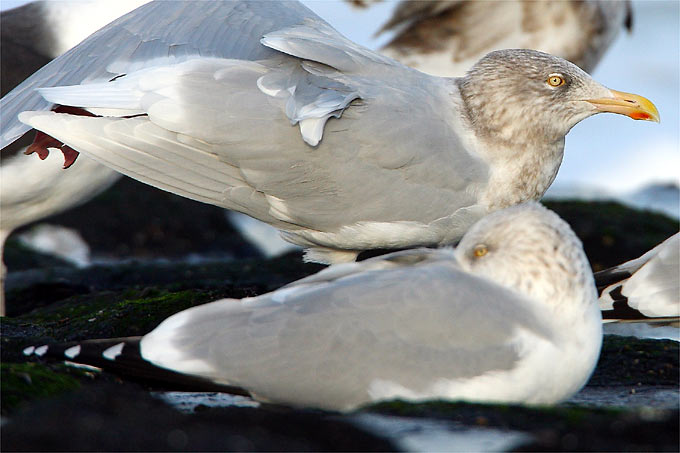 "Skuas"
In a more or less drastic manner, partly reminiscent of Alfred Hitchkock's classic "The Birds", reports are often made about seagulls (mostly herring gulls) who 'lie in wait' for visitors to Sylt on the beach or on the promenade to get children their portion of fries or even their own To pick the ice cream cone out of your hand. The fact is, seagulls are stubborn and cheeky once they learn that humans have something to eat. As a result of the widespread practice of throwing bread and other leftover food to seagulls for general entertainment and for the joy of their flying skills, they learn to occasionally help out if the seagulls believe that the food is not served quickly enough. Seagulls who also get bread straight from the hand of humans while feeding have an advantage over those who patiently wait for it, but then come away empty-handed. The difficulty for seagulls is simply to recognize for themselves when humans have food ready for them and when they would rather keep the ice for themselves ... 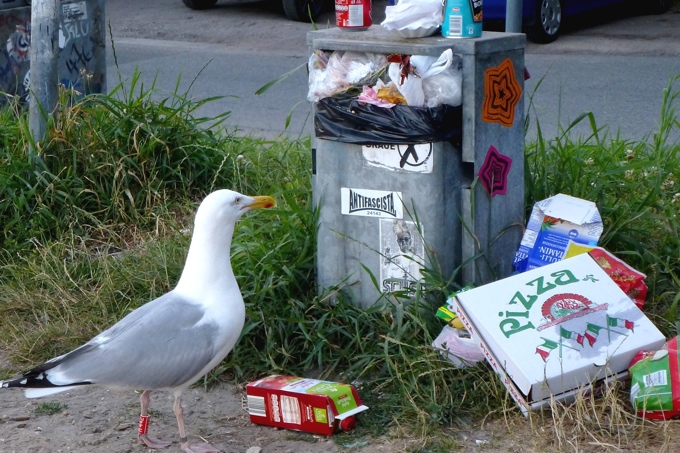 In any case, the seagulls do not seek to injure the supposed or actual feeder when they approach him from a short distance. They are only after the food. Therefore, injuries to people are extremely rare and occur especially when a finger is 'in the way' in the heat of the moment. In addition, seagulls learn very quickly that there can be all sorts of leftover food in bags, garbage cans or on uncovered tables - "Seagull" just has to be curious!

The only thing that can help against this type of food acquisition is a consistent ban on feeding, which forces the animals to turn to other sources of food again. A seagull cannot live long from mouth robbery alone. The occasional call to kill the animals is completely ineffective: In summer, killing seagulls that could breed is generally prohibited. In winter, numerous other seagulls, some of which have migrated from far away, are our guests, who hardly show this unpleasant behavior.

Seagulls as building breeders
For some years now, storm gulls and occasionally herring gulls have been breeding more and more near the coast on the roofs of buildings. The main reason is that they can avoid their enemies, foxes and martens, and thus have a supposedly safe breeding site. Common gulls also benefit from the fact that they usually have larger, short-clipped lawns in the vicinity of higher buildings - a substitute for the ever-shrinking grassland from which they originally obtained part of their food (earthworms, insects, mice).

Reporting on seagulls in the daily press - today much more differentiated than in the past.

However, not every resident likes it when seagulls have chosen the mostly gravel-covered flat roof of their house as a substitute habitat. The fear of the transmission of diseases, but above all the alleged noise pollution, is a problem for many locals and tourists. However, the transmission of salmonella, which seagulls are likely to carry, can simply be avoided through simple hygiene, such as the usual washing of hands.

It is controversial whether one can actually speak of excessive annoyance when the seagulls are screaming - especially in comparison to clearly loud sources of noise such as car traffic - or not rather consider it to be 'local'. Seagulls are part of the coast, like the sound of the sea or the sand on the beach! If you complain about the sounds of the animals, the rustling of the palm trees will probably be too much for you, even in the tropics. More tolerance is appropriate - after all, we should welcome it when an animal species does not immediately “run away” when it comes into contact with humans, but on the contrary tolerates our proximity. And if a pair of gulls vigorously defends their young birds during the breeding season, we should accept this as a matter of course and understandably.

Actions such as the cruel killing of the young Common Gulls on the roof of Kiel University in 2009, which had already been preceded by other attacks in the years before, are not only extremely brutal, but also violate legal provisions of animal and nature conservation law and become sensitive Penalties proven. 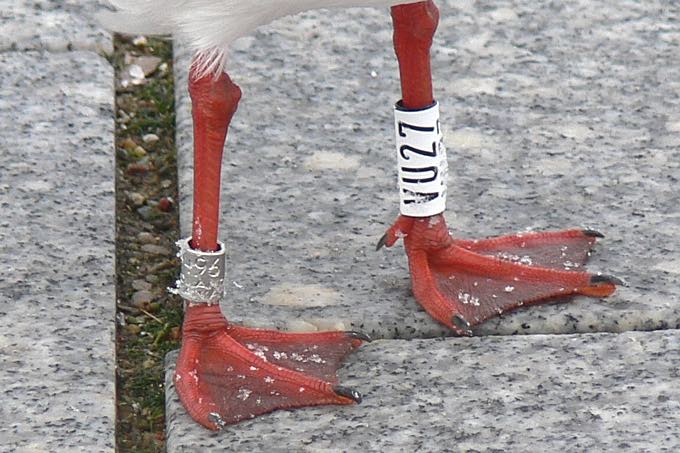 If you want to remedy this, the nesting site must be made unattractive for the seagulls outside the breeding season. Tightly tensioned wires can contribute to this. It is also not advisable to shoot the animals because, as with the 'skuas', the animals are not allowed to be killed during the breeding season, but in winter mainly animals from northern or northeastern populations live with us.

More serenity
NABU recommends showing more serenity in alleged or actual conflicts with seagulls and accepting this as an experience of nature. It is not uncommon for people to be responsible for these conflicts and to avoid them. Flying skills, adaptability and elegance are sufficient reasons to give this group of birds the space they deserve - observing the intelligent and elegant coastal birds is an interesting and fascinating natural spectacle.

And if you look very closely, you can even do something for science - many seagulls are ringed as part of research projects, with more inconspicuous metal rings, but often also with large plastic rings with easy-to-read combinations of letters and numbers. Such observations should be reported to NABU with information on the species, the observation location and the combination read - as a small component for investigating the way of life of our native seagulls. 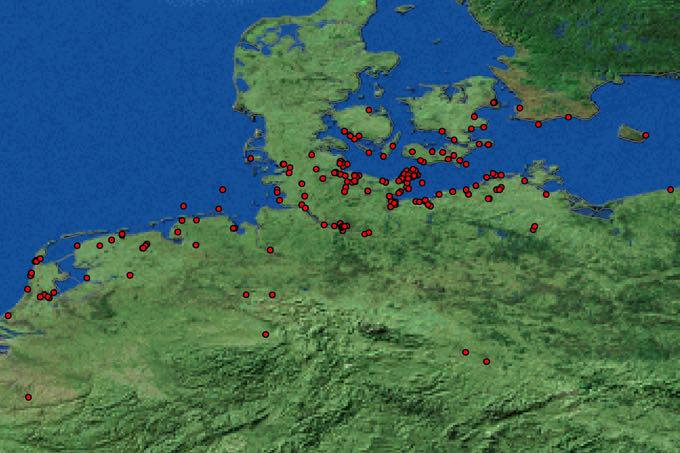 Against the background of the significant decline in many species of gulls and the fact that animals shot are not used, it is justified that no hunting season is planned for any species of gull in Schleswig-Holstein.