What are Mexican strawberries

Flown in: strawberries from Spain, asparagus from Mexico

Some fruits and vegetables have traveled far: they are flown halfway around the globe by plane or shipped across entire oceans before they are consumed. Asparagus imported from Mexico, for example, has traveled over 10,000 kilometers by air - large amounts of aviation fuel are emitted into the atmosphere. It goes without saying that this leads to a catastrophic climate balance and is downright poison for the environment.

In most cases, all the effort is not necessary. Because most of the fruit and vegetables can also be bought from local producers. You just have to go a little bit according to the seasons, but unfortunately many people today have lost their awareness of which fruits are grown and harvested when due to the large oversupply.

1 bunch of Mexican asparagus, imported by plane in February (11,800 km), consumes approx. 5 liters of petrol. 1 Bund of German Asparagus, bought in May, consumes about 0.3 liters of gasoline. (Source WWF)

That’s an exciting topic! Take, for example, autumn - the classic harvest time: apples, pears, pumpkins, mushrooms, figs, various nuts, quinces, grapes. Those who like fresh fruit and like to cook with regional ingredients can draw on unlimited resources. How about, for example, hearty zucchini fritters, walnut bread or muesli with mixed fruit? Delicious! - Autumn is obviously particularly suitable for seasonal cuisine.

The vegetable shelf as a climate killer

But many consumers do not care about the unmistakable advantages of autumn. They continue to buy fruit and vegetables from overseas, making their vegetable shelves a climate killer. It is not for nothing that 140 tons of fruit and vegetables are flown into Germany every day.One reason for this is surely the perfidious marketing of the supermarket chains: Because if the consumer is repeatedly suggested in brochures and with special offers that pears in spring and strawberries in winter can be obtained without any problems, it is not surprising that at some point they will no longer be interested in seasonal nutrition.

The advantages of seasonal cuisine are obvious: Those who eat regionally and according to the season not only protect the environment. He's also doing something good for his wallet. After all, products that are currently being harvested are always offered at particularly favorable prices. Here it is worth buying in large quantities and then freezing, drying, boiling or vacuuming everything.

If you buy the products directly from the producer, farmers in the surrounding area also benefit, who are paid significantly better for their goods in this way than with traditional sales via wholesalers. Here you can visit the weekly market or one of the many farm shops that have opened in recent years. If you don't have the time, we recommend an eco-box subscription. Here, producers or producer groups fill a box with seasonal products every week and deliver them free of charge.

Winter harvest in Germany - even without a greenhouse

If you prepare seasonal dishes, the ingredients used are based on the respective seasons and what is then harvested in your own region. In other words, what spring, summer, autumn and winter has to offer in culinary terms is put on the table. For example, there are rhubarb and asparagus in April, strawberries and broad beans in June or gooseberries and celery in August. 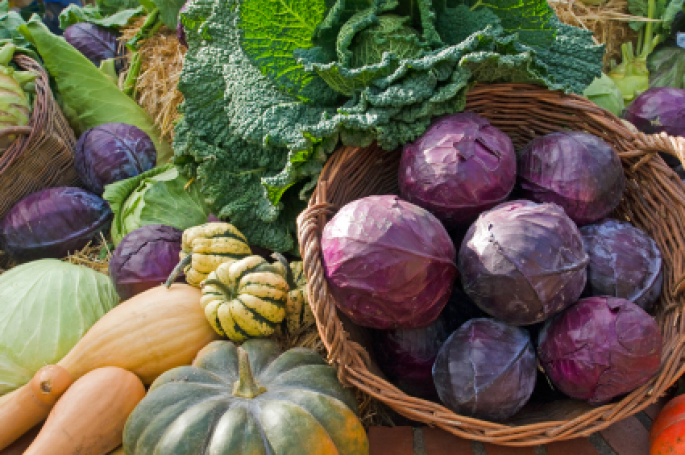 “Hm,” you might think, “I understand that this can work quite well in summer and autumn.But in winter? Nothing grows there. ”But that's not true! Because different things are in season in winter too: red, green or white cabbage are part of it, but Brussels sprouts, beetroot or turnips are also tasty now. With kale, a little frost is even good for the taste. You can find a brief overview of the specific cultivation and harvest times under this text.

It doesn't work without a supply

As much as you orientate yourself towards the seasons when shopping, you can hardly get by without having to keep supplies in spite of everything. After all, there are some ingredients that you cannot do without all year round. As I said: It is worth freezing what you bought at harvest weddings as fresh as possible. Depending on the food, you can also use traditional ways of stockpiling - after all, not everything that is old is bad! Apples and pears, for example, can be dried and later enjoyed as chips or rings. If you don't have the time to freeze or dehydrate, you can simply grab the freezer or shelf at the organic supermarket - after all, everything is available in organic quality.

In general, however, it is advisable to always have a small basic supply in the house. But which foods should you stockpile so that you can always cook quickly and easily as well as fresh and tasty? Until recently, there were no cookbooks on this. To make shopping easier and to save time when cooking, we opted for the 4-ingredient formula. The highlight: In addition to the basic supply, you only need four freshly purchased ingredients. We guarantee that! With the 4-ingredient formula, you can quickly conjure up something delicious on the table without having to go shopping - and if you also have seasonal products on hand, it's even faster. Our three headings "4 ingredients" and " gluten-free and vegetarian - Volume 1 "and" gluten-free and vegetarian - Volume 2 "as ebook.