What does broken mean in England

Will Brexit break the UK? Nationalism and striving for autonomy in Great Britain since 1977

Brexit is done - and the blame for the United Kingdom's exit from the European Union seems to be clearly divided. Numerous commentators agree that with excessive, “toxic” nationalism, England forced the other parts of the country to separate from Europe. Against this background, the fact that since the Brexit vote in Scotland the voices calling for a new independence referendum have become louder and that there are also worries in Northern Ireland about new attempts at autonomy has caused a lot of malice: If the dissolution of the United Kingdom is the price of Brexit, it could England have tripped themselves up in the pursuit of former glory and international greatness. But this consideration falls short. The concern about a “break-up of Britain” is far older than it might seem at first glance. If you follow their history, it becomes clear that the political efforts of the past decades to hold the different parts of the country together through constitutional reforms made a decisive contribution to Brexit and the current rise of nationalism in Great Britain.

Is the UK falling apart? 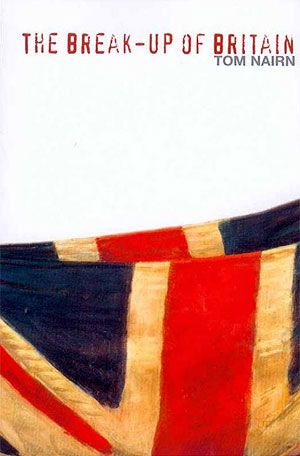 The catchphrase “Break-up of Britain” goes back to the Scottish political scientist Tom Nairn, who at the end of the 1970s thought about the electoral successes of nationalist parties in Scotland and Wales from a Marxist perspective. In fact, in the 1960s it was believed that Scottish nationalism was a thing of the past. But then the Scottish National Party (SNP) won a parliamentary seat in Hamilton in a by-election in 1967: a victory that was perceived as a sensation. In addition, a year earlier Gwynfor Evans had won the seat in Carmarthen for the Welsh nationalist party Plaid Cymru. Anglo-national politicians like Enoch Powell were also very popular in England. Against this background, Nairn published his collection of essays in 1977 The break-up of Britain. Crisis and neo-nationalismwhose title was program. The catchphrase "Break-up of Britain" described a political concern - or in Nairn's case: hope - that emerged particularly in the mid-1970s and which was astonishingly similar to the current debate: namely, that the UK, in the face of nationalist tendencies, was in Scotland could fall apart.

By viewing nationalism as a potentially fatal blow for the United Kingdom, Nairn followed the diagnosis of the "decline of Britain" - a popular debate that had initially been held mainly among left-wing intellectuals since the 1960s. Nairn pointed it to the aspect of nationalism. The political situation, especially in the early 1970s, seemed to prove the author right: strikes, the oil crisis, three-day week, nationalism in Scotland and Wales and the civil war in Northern Ireland could be indicators of the crisis in the British state and the imminent "decline of Great Britain" to be read.

In Westminster, too, the election successes of the SNP and Plaid raised fundamental questions about how the unity of the United Kingdom could be preserved in the face of growing nationalism. One possible option appeared to be concessions to the participating nations through a constitutional reform, in which the government, however, had little interest. The discussion was outsourced to a broad and long-running commission: the Royal Commisson on the Constitution began its work in April 1969, but did not present its report until October 1973. But at the political level the debate lived on and was fueled by the renewed successes of nationalist parties in the 1974 general election. The demand for the "Home Rule", for the individual parts of the United Kingdom to be self-governing by local authorities, became relevant again. 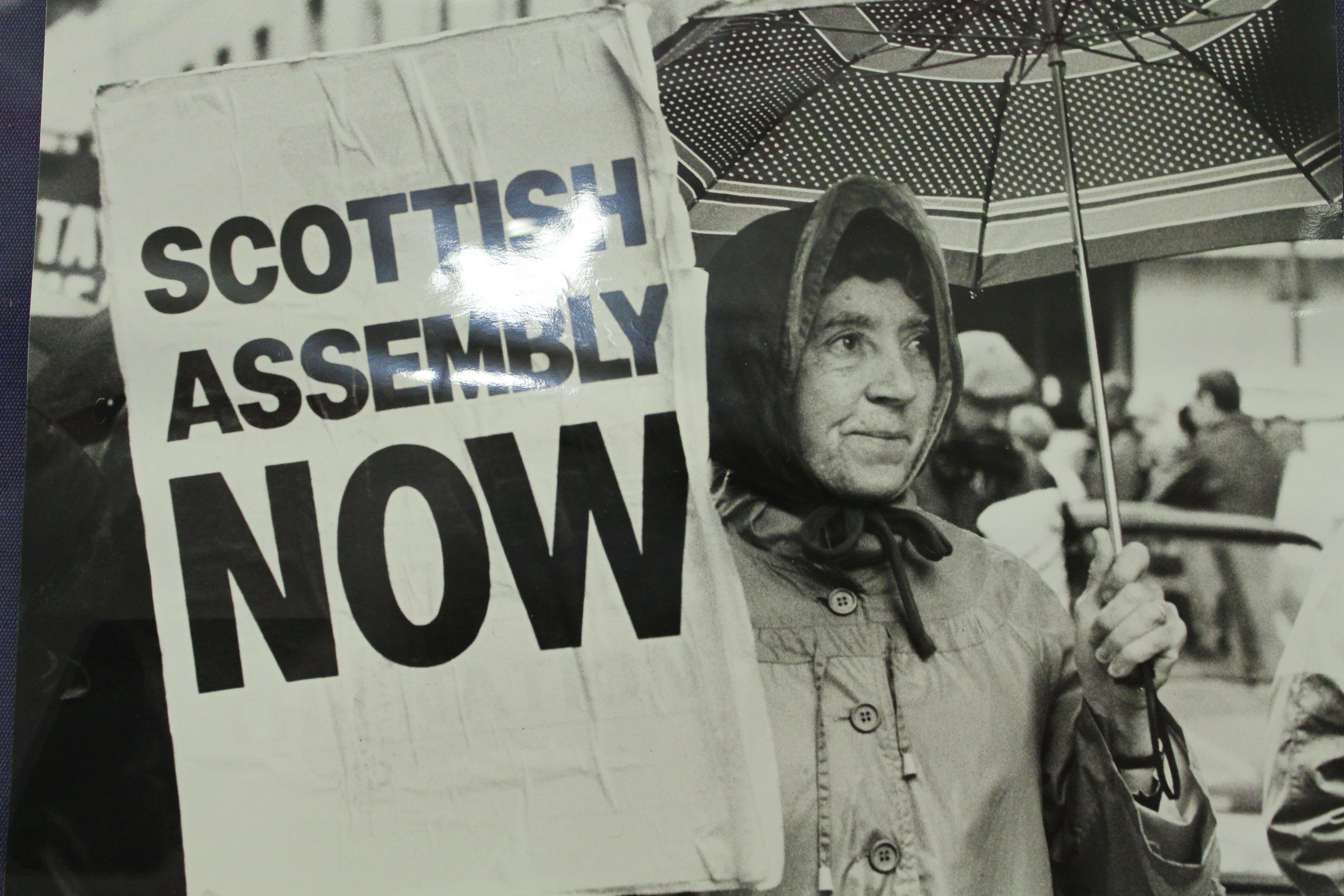 The project of a "devolution", about which the parliamentarians in Westminster had debated at irregular intervals since the end of the 19th century, experienced a renaissance that promised the transfer of administrative or legislative functions from London to the regions. Northern Ireland was the model for the measures, albeit not necessarily a shining one: as early as 1921, as part of the political division of the island, a separate parliament had been created there, although it had been powerless since 1972. Due to the Northern Ireland conflict, the part of the country was ruled from Westminster. The attempts at autonomy in Scotland and Wales also reached their limits at this time: in 1978, referendums on the creation of regional governments were held in both parts of the country, but they failed to achieve their goal. While in Wales the bill was rejected, in Scotland the necessary quorum of voters was not achieved.

Even if the political project of devolution in the 1970s failed for the time being, the narrative of the “break-up of Britain” did not lose its impact. On the contrary, Nairn's ideas, detached from their Marxist context, found their way into political discourse under this succinct title and were primarily discussed scientifically in the years that followed. Politically, however, the questions of “Home Rule” and “Devolution” only played a subordinate role; the Margaret Thatcher and John Major governments were avowedly uninterested. It was not until the 1997 election victory of the Labor Party that worries about the decline of the United Kingdom and the desire for political renewal triggered major changes to the British constitution. Devolution became part of a large-scale reform program with which the team Tony Blair and Gordon Brown after they formed their own party ideologically and organizationally New Labor had upgraded, now also wanted to reposition the United Kingdom for the future.

The possibilities of a fundamental reform of the British constitution had been discussed since the 1960s. In the 1980s, the voices of left-wing liberal intellectuals in particular had increased, demanding a “written constitution”, i.e. a constitution codified in writing with a defined separation of powers. Such reform proposals would have intervened much more deeply in the constitutional structure that had grown over the centuries than the reform project that was ultimately implemented, which turned out to be a compromise in this regard. A constitution based on the European model, codified in writing, was not introduced and the sovereignty of the central government in Westminster was not curtailed in principle: the powers and powers now transferred to the individual parts of the country by the Blair government in the course of devolution - as happened in Northern Ireland in the 1970s was - to be withdrawn again. After two successful referendums, the Scotland Act 1998 and the Government of Wales Act 1998 established a Parliament in Scotland and an Assembly in Wales. Northern Ireland's parliament was also reinstated as part of the peace process by the Northern Ireland Act 1998: the granting of limited self-determination was understood here as an integral part of the peace process and was also linked to a successful referendum, also held in 1998.

Autonomy rights and the bucking game 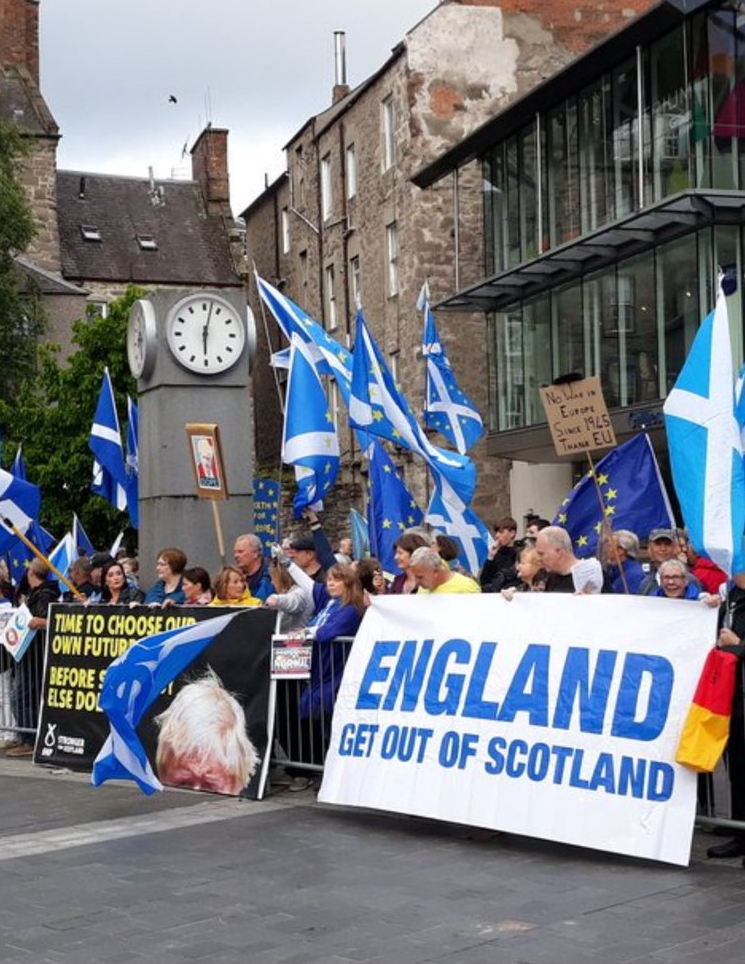 Demonstration for the Independence of Scotland; Source: effiedeans.com

Even if Schott: inside, Welsh: inside and Northern Ireland had limited self-determination as a result of the constitutional reform since the end of the 1990s, the newly created system of limited autonomy rights contained considerable political explosive power in the long term. The basic problem lay in the unequal treatment of the parts of the country: Political competencies were not handed over to the individual parts of the country according to uniform principles, but rather according to the assumed strength of the respective national consciousness of Westminster. Accordingly, the regulations for Scotland, Wales and Northern Ireland differed significantly from one another. The void remained England, which had no parliament of its own. Thus, the system of the partial "Home Rule" led to the situation that MPs from Northern Ireland, Scotland and Wales were able to vote on matters that only affected England, while conversely, MPs from England were not allowed to vote on matters that affected the Northern Irish Assembly, the Scottish Parliament and the Welsh Assembly.

At the same time, this construction shifted the regional governments and parliaments of Scotland, Wales and Northern Ireland and thus their voters into a different position on the EU. The devolution system enables Schott: inside, Welsh people: inside and Northern Ireland, and above all the respective regional governments, to blame the central government in Westminster for political undesirable developments; a possibility that is currently being used particularly by Nicola Sturgeon, First Minister of Scotland for the Scottish National Party. Politicians in England, on the other hand, pushed the buck for unpopular decisions across the English Channel to Brussels. The fact that the European Union began to act as an important protecting power of regional governments and parties with the concept of a “Europe of the Regions” in the 1990s only increased this difference.

You can support us by sharing this article: FacebookTwitter

Brexit and the "Break-up of Britain" 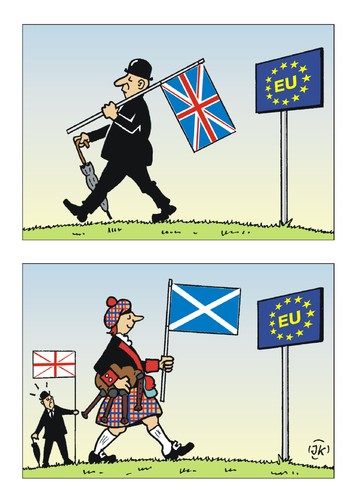 Ironically, concerns about the “break-up of Britain” became not only the starting point, but also the result of the constitutional reforms: concern about the future of the UK's political system had led to the devolutionary measures, but it was precisely these that now developed considerable political power Potential for conflict. Critics warned that Schott and Welsh men could soon no longer be satisfied with the devolution provisions and demand complete independence. But worries about English resentment, an Anglo-nationalist counter-movement, also increased. If you look at the results of the Brexit referendum, there is a clear gap within the parts of the country - although not quite as clearly as some devolution critics had expected: while with a turnout of 72.2% of those eligible to vote, 51.9% of the voters for who voted to leave and 48.1% were in favor of staying, in Scotland a clear majority of 62% voted in favor of staying. In Northern Ireland, where the EU is an important factor because of its role in securing the Good Friday Agreement, 55.8% of voters were in favor of staying.

Wales alone voted with England by a majority to leave. However, it cannot be overlooked that there is more to the referendum result than just dumb Euroscepticism among the people living in England and the hubris of politicians. Rather, the Brexit vote must also be understood in terms of the history of the British constitutional reforms, the roots of which lie in the decline and reform discourses since the 1960s. Brexit is therefore at least as much a story of internal strife in the UK's political system as it is of the conflicts between the UK and the EU.

Meanwhile, concerns about a possible breakup of the UK have increased. After the Scots had only just spoken out in favor of remaining in the Union in 2014, Nicola Sturgeon called for another independence referendum. The months and years to come will show whether it will succeed in breaking open the kingdom that has been united through annexation, political union and conquest.