What is the deciphered word NIW

According to labor law, the job reference must always be “true” and “benevolent”. This means that negative job reference formulations are prohibited. But not hidden criticism (so-called "Kassiber"). As a result, a testimony language has established itself - with numerous secret codes, hidden notes and phrases that may sound nice, but mean the exact opposite. We will show you what the true meaning of individual job reference formulations is and how applicants can easily decipher the codes in the reference ... 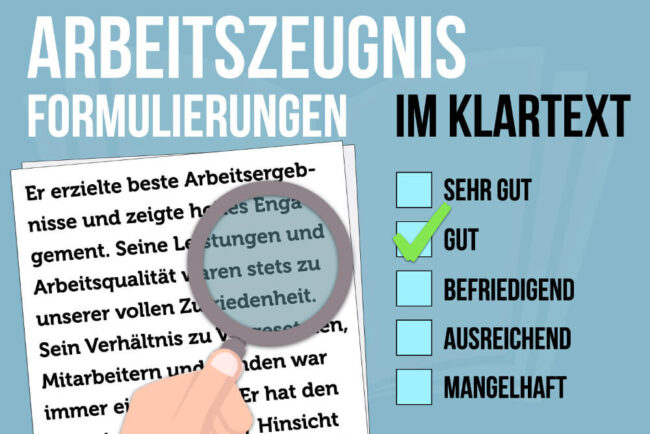 You will always find hidden notes in all job reference formulations. In total, you give the overall assessment. You can recognize grades by words such as “always” or “to the fullest” or “to the fullest” satisfaction. The alarm bells should go off when you read the word “trying”. That NEVER means anything good, but that the person was a sneak.

Deciphering job reference grades is relatively easy. The codes always follow the same formula. The meaning of the formulations in certificate German in plain text:

Often it is only nuances in the wording that distinguish an excellent testimony from a verbal execution. Therefore, here are even more examples of notes and secret codes in the job reference formulations.

Whether it is a bad job reference or a positive job reference is not only revealed by the certificate wording of the respective grades. Such secret messages are mainly in the qualified job reference. In contrast to the simple job reference, it contains an assessment and assessment of the employee's performance and social behavior. In addition to important soft skills, this also includes behavior towards superiors, colleagues and customers.

The danger is greatthat employees believe the first time they read the job reference that the HR manager or boss is their biggest fan. Not at all! Some fine words hide a bad judgment. In your job reference, therefore, pay particular attention to the "performance assessment" and assessment of social behavior ("behavioral assessment") as well as the so-called "closing formula". Here are some deciphered formulations in plain text.

"It quickly became popular with customers."
Meaning: "He made too many and too quick concessions."

"He tried to meet the requirements."
Meaning: "The employee was a zero."

"She set about the tasks assigned to her with great enthusiasm."
Meaning: "But don't ask how chaotic that was!"

"She was committed within the scope of her abilities."
Meaning: "Unfortunately, she is completely incapable."

"Her punctuality made her a good example."
Meaning: "Unfortunately there was nothing more than punctuality."

"She knew how to successfully delegate all tasks."
Meaning: "She was lazy and skilfully passed the work on to colleagues."

"He showed understanding and interest in his work."
Meaning: "He just didn't work."

"He was always an understanding superior to his employees."
Meaning: "He was not assertive and had no authority."

"She did all the tasks dutifully and properly."
Meaning: "She only did what she was told and showed no initiative."

"It essentially met our expectations."
Meaning: "His performance was simply poor."

"He solved all the tasks for his own benefit and in the interests of the company."
Meaning: "He committed theft and was noticed by serious offenses."

"He was committed to the interests of his colleagues both inside and outside the company."
Meaning: "He was on the works council and was involved in a union."

"He has specialist knowledge and healthy self-confidence."
Meaning: "The guy is more arrogant than a diva."

"She showed a good empathy for the concerns of the workforce."
Meaning: "She flirted more than she worked."

"He got on well with his superiors."
Meaning: "He is a follower and adapts everywhere."

"His sociability helped improve the working atmosphere."
Meaning: "He liked to drink a schnapps while he was working."

"He was capable and able to express his opinion."
Meaning: "He cannot take any criticism."

"She showed a refreshing way of dealing with colleagues and superiors."
Meaning: "She is cheeky and has no manners."

"She was very capable and knew how to sell well."
Meaning: "She was an impertinent self-important woman."

"She had a comprehensive understanding of the concerns of the employees."
Meaning: "She is homosexual or lesbian."

"His behavior towards colleagues and superiors was always exemplary."
Meaning: "He had problems with his boss." (Because he is only mentioned after the colleagues)

"He was a sociable and outgoing colleague."
Meaning: "Nobody could stand him."

"He / she leaves us by mutual agreement."
Meaning: "He / she anticipated a termination."

"We wish him all the best and health."
Meaning: "Warning, he's ailing!"

"We wish him all the best for the future, especially success."
Meaning: "He had no success here."

"We wish him / her all the best for the future, including success."
Meaning: "He / she did not have any success here."

Whether performance appraisal, behavioral appraisal or closing formula: The most important grades, negative messages and secret codes in the job reference - and their true meaning. Download here for free:

The best comes at the end - or not: There are only two to three sentences at the end of the job reference. The so-called closing formula. But it is becoming more and more important. For two reasons:

How is the closing formula structured?

The structure of final formulas in the job reference is divided into four parts and sections:

Please pay attention to the following final formulas and formulations. Which one works better for you?

Mr. Müller is leaving the company at his own request. We very much regret his departure and thank him for his consistently good and dedicated work. We wish you continued success and all the best, both professionally and privately.

Mr. Müller leaves the company by mutual agreement on DD.MM.YYYY. We regret this and at the same time thank you for his cooperation. Furthermore, we wish you every success professionally and personally.

Despite the superficial similarity, you can quickly see which closing formula increases your chances of applying: The second closing formula only sounds nice, but it is not. When evaluating the formulations and grades in the certificate language, pay particular attention to:

If you can write your job reference yourself or want to compare your reference with another: Here you will find a sample job reference that consistently corresponds to the grade “very good”. Only the soft skills were rated “good”. But that makes it more believable. You can download the pattern as a PDF here for free:

New encryptions and codes in the certificate

Recently you have found new codes and secret messages in job references, which can hardly be recognized at first sight. There is not always bad will behind it. Sometimes it is simply ignorance or ignorance. In the meantime, however, you must apply with the certificate in the appendix. You should therefore pay attention to these new job reference formulations:

Emphasis on the unimportant

Pay attention not only to how your performance is being judged, but which ones too. The more unimportant details are there, the worse the testimony. This applies even more to things that are taken for granted, such as the “economical use of office supplies” or “always polite manners”.

Twisting the hierarchical order is also a nasty trick. If it says in the job reference: "He / she cultivated impeccable behavior towards colleagues, customers and superiors", this is a secret code for: "He had problems with authorities." The same applies if subordinate tasks are listed first, but higher tasks only on Appear at the end.

Everyone would expect care and accuracy from a controller. If you want to give such employees a bad grade, you often leave out the crucial qualification. So also pay attention to what is NOT in the certificate (see video).

Another nasty job reference formulation is exaggeration.Example: "He / she had an exceptionally brilliant way of sharing his / her knowledge with colleagues." Of course, in plain language this means pure irony and the exact opposite: "He / she was a pedantic smartass."

You should be prudish if you find a phrase in your testimony that sounds positive with “not”, “no” or “never”. Example: “His punctuality gave no cause for complaint.” Sounds praiseworthy - but it isn't. If there was really no cause for complaint, it wouldn't be worth mentioning. But that's how it stands - and consciously wakes sleeping dogs.

This technique is not immediately recognizable for the layperson. There are standards in the certificate language and certificate codes. For example: "His / her relationship with superiors, colleagues and customers was always exemplary." If you omit part of it ("customers" - exception: you actually never had anything to do with customers), the job reference formulations means that you are exactly had problems with it.

One expects personal initiative from service providers. Passive formulations indicate the opposite: Here someone only acted on instructions and was otherwise passive and lazy. Examples: "Mr. ... / Ms. ... the tasks ... were assigned." / "He / she worked for us as ..." / "He / she was used for the following activities: ..." Even if that is factually correct, it is urgent does not make an overly committed impression on the reader.

There are more than 10,000 testimony processes at German labor courts every year. You can legally defend yourself against most of the formulations. Exception: If misconduct - for example infidelity or theft - is proven, this may be mentioned. Otherwise there are some rights and judgments for employees with the certificate codes.

Important judgments on the job reference 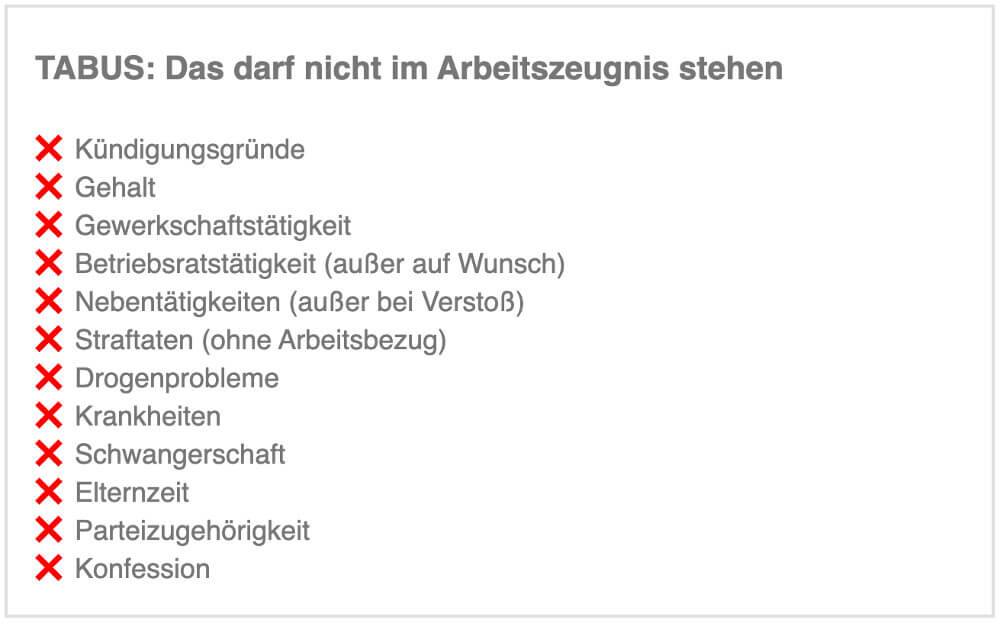 This is how you defend yourself against a bad testimonial

If your reference is incomplete or below average (worse than grade “satisfactory”), you can reject the reference and request a new one. You do not have to accept misleading or contradicting job reference formulations as well as spelling errors. You can dispute all of this.

However, you shouldn't wait too long: The right to corrections to the job reference expires after 15 months at the latest. Until then you have three options:

TIP: Please never falsify the job reference! This corresponds to a forgery of documents and can result in severe and expensive penalties.