Why are boys crazy about Royal Enfield 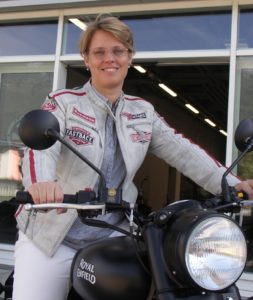 A new job and a new life: Simone Schmid on a Royal Enfield in front of her workshop.

Studying archeology in a foreign language, three small children, two jobs, a separation: it wasn't easy, Simone Schmid's everyday life in Bologna. An encounter on the edge of an excavation site changed everything: Today the 43-year-old runs a motorcycle workshop with her husband in Bellinzona and enjoys having customers come to her to make their dreams come true.

Ms. Schmid, you run a motorcycle shop in Bellinzona - where does your interest in Harley-Davidson, Royal Enfield and other heavy machinery come from?
SIMONE SCHMID: As a girl I had nothing to do with machines, so I wanted to become a journalist or, even better, a writer. I had a very vivid imagination - and correspondingly many fears. Writing helped me organize my thoughts from a young age. When I had written three pages, I was at peace with the world again. In my Catholic family in Bülach, helping people in difficult life situations was very important. Accordingly, I toyed with the idea of ​​studying social work, and after school I completed an internship in a day care center for drug addicts in Rimini.

And did you begin to have doubts?
I felt that I was not up to the job. Some of the residents were barely older than me, one suffered from psychosis, another died as a result of AIDS, and a third took his own life. It got under my skin so much that instead of social work I studied Romance studies, German studies and journalism. During my first internship in journalism, this career aspiration was also shattered: I either had to write about banalities or adjust reality so that it corresponded to the editor's worldview. And my life became complicated enough even without journalism: I married at the age of 23, became a mother at the age of 24, moved from Zurich to Bologna and learned from the professor of German studies at the University of Zurich that a woman with a baby would not be admitted to the examination. Shortly afterwards my mother passed away and I gave up my studies while I was doing my licentiate thesis because it all became too much for me.

How did you gain a foothold in Bologna as a young mother?
I gave a few German courses and offered city tours. But I was not doing well, especially after the birth of my second daughter, I was on the verge of a depression of exhaustion. I well remember a key experience from that time: one evening when my husband came home, I compressed him terribly because he had put the key on the table instead of in the drawer. I was at least as frightened as he was, because I'm not a particularly orderly person - and understood that I urgently needed to change something. I was studying the university's course catalog and was blown away when I discovered the archeology program. At first I thought it was impossible for me because of the two small children, but then I realized how extensive the childcare was and signed up.

Her younger daughter was just 9 months old.
Yes, terrible, isn't it? The truth is, my children were noticeably revived when they were less often cared for by an unhappy mother. I really did the full program with them: playground, cooking, handicrafts, singing, painting, no TV, no computer games, no plastic toys. But I wasn't doing well, and that was the bottom line. That's why archeology was so important to me. But of course it meant a lot of effort. When I took the Latin exam in Italian, I was eight months pregnant with my third daughter. And when I was looking for a part-time job, my applications went without a response for a long time until two excavation companies offered me a job at the same time. I took both the 40 percent and the 60 percent position, which meant that I studied for university from 5 a.m. to 6.30 a.m., then took the children to daycare and from 7.30 a.m. to around 5 p.m. worked hard physically - more often with a pimple than with a brush. Then I picked up the children again, prepared dinner, put them to bed and studied archeology again.

And how did you get your bachelor's degree?
Yes, but I separated from my husband afterwards and it was a difficult time personally and financially because I had to combine a master’s degree, work and childcare. Then I met my current husband by chance during a major excavation right next to a Harley-Davidson dealership. He handed me an advertising sticker with his phone number on the back, and I thought: If you only knew how little my world is - my old Holland bike is enough for me, I don't need a Harley. But then I got interested in how a person could be so excited about motorcycles, and five months later we were a couple. But in Italy there was almost no construction activity due to the economic crisis and therefore no more emergency excavations, I ran out of work and we finally moved to Switzerland, where I worked as an archaeologist on various projects in recent years.

And then you opened a joint motorcycle workshop in Bellinzona.
Yes, the opening of our own agency in May 2017 finally brought peace to our lives. With us, customers will not only find the traditional brands Harley-Davidson and Indian, but also the Indian-English trend brand Royal Enfield, which we will be exclusively representing in the canton of Ticino from next year. In France and Italy you can see this solid and inexpensive retro motorcycle on every corner since the then US President Barack Obama praised its quality in 2015. My husband is an absolute Harley expert, he knows everything about these machines, but I take care of the Royal Enfields. Our location here in Bellinzona is perfect for the rental business: customers from German-speaking Switzerland only need 100 minutes by train from Zurich and can go on a motorcycle tour here for a weekend in the sun.

It sounds like you are in your element with the motorcycles and no longer regret social work, writing and archeology.
The nice thing about today's job is: Now people don't come to me because they need something, but because they want to make a dream come true. I am convinced that you stay healthy longer if you fulfill a wish every now and then in everyday life, even if it is just a tour around Lake Maggiore. I haven't completely given up my own dream of writing yet. During archaeological work in the Calanca Valley, I have heard such interesting stories that it would be a shame not to write them down. Maybe one day there will be a children's book out of it.

You can follow any comments on this entry through the RSS 2.0 feed. The comment function is closed.