Has anyone swam from Russia to Alaska?

Triathlon around the world - wanted a sailboat 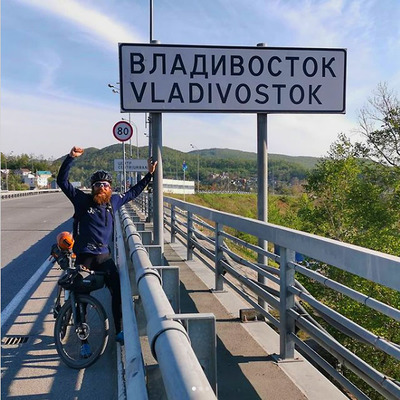 05/18/2021 | (rsn, sd) - The Munich extreme athlete Jonas Deichmann arrived today on his triathlon trip around the world after crossing Siberia in winter (rsn reported) in the port city of Vladivostok on the Russian Pacific coast. It is still uncertain which route the journey will take after 17,000 kilometers on the bike.

On the last 1400 kilometers to the coast, Jonas was dated
former cycling professional and filmmaker Markus Weinberg. In Vladivostok, the local cycling club gave them a terrific reception. Now Deichmann wants to cross the Pacific - and is still looking for a sailing boat to take him with him.

Since crossing the USA or Canada currently seems impossible due to the corona situation, Jonas will switch to Mexico to walk 5000 kilometers from Tijuan to Cancun. He will pull his luggage behind him on a trailer. Jonas' arrival in Munich is planned for the end of the year; he will then have mastered 120 times the Ironman distance.

Here Jonas' experiences of the last two weeks
from his internet diary (see link below):

WEEK 32
The weather is cold and wet, no better now in spring than in winter. The temperature is around zero degrees in constant rain or sleet. I drive up to 150 kilometers without a gas station or restaurant - or even a single house. Somebody tells me that in Soviet times there was an army base in Mogocha, which is said to have been extremely unpopular because of the weather. The saying "God created Sochi and the devil created Mogocha" comes from this period.

Four years ago, during my Eurasia crossing, I had my worst crisis here. It was August and I in shorts when it started to snow here. At the junction to Mogocha I came to a small restaurant; I was completely frozen, the old lady behind the counter was about to call an ambulance. I was unable to pay because my fingers were too clammy to count the money. The nice lady gave me food and drink and hung up my clothes to dry.

This time it's not that bad because I'm better equipped - but again I come to this restaurant completely frozen. And again I am well looked after and can spend the night in a small room behind the restaurant.

WEEK 33
The photographer Markus Weinberg joined me on the first day of spring to accompany me the last 1400 kilometers to Vladivostok. Our joy about the beautiful weather lasts for exactly one day - then continuous rain sets in again. We only have a tiny tent that we share for the night. The ground is swampy, everything is wet.

For two days we drive through a Jewish autonomous area (Oblast) before we cross the great Amur River and roll into the city of Khabarovsk. My first trip leads to a bike shop, because I've been on the road for 1,500 kilometers with a defective rear wheel bearing. In addition, the chain and brake pads urgently need to be changed, a sprocket is loose.

The Khadorovsk cycling community has heard from me, three drivers come to the shop and accompany us on our way out of the city. We cycle 210 kilometers on this day; It's another 700 kilometers to Vladivostok - the final spurt! We have now driven around the northeast corner of China and turned south, where Vladivostok is on the border with North Korea. Now it is really spring: in the afternoon the thermometer climbs to 19 degrees ...

Jonas Deichmann started his project
on September 26th in Munich. He rode his bike across the Alps to Karlobag on the Croatian coast. From there he swam 450 kilometers along the Adriatic coast and reached Dubrovnik on November 22 after 54 days in the water. Jonas set a new record for the longest swim route without an escort boat.

From Dubrovnik he went east by bike to the Chinese Pacific coast. Now Jonas wants to cross the Pacific in a sailing boat and then walk from west to east across the USA (according to the original plan).

The man from Munich already holds the records
for all three major continental crossings by bike: "Eurasia" from Portugal to Vladivostok in 64 days, "Panamericana" from Alaska to Tierra del Fuego in 97 days and last year from the North Cape to Cape Town in 72 days - a whole month faster than the previous one World record. There is a book in stores and a documentary about "Cape to Cape" Vimeo.