What would happen if Iran disappeared?

According to the report by the Supreme Audit Office, the government raised a budget of $ 31.4 billion to finance imports between March 2019 and March 2020. However, only goods worth $ 26.6 billion were imported. For the remaining sum, worth $ 4.8 billion, there is currently no evidence.

One day later, Iran's President Hassan Rouhani responded to the report. "Nothing has disappeared," he tried to appease the public. "The government has a list of business people who have received government-subsidized dollar foreign exchange for imports."

In addition, Rouhani accused prosecutor Azar of disseminating misleading information. The money has not disappeared. The government continues to have full confidence in the importers. He asked those entrepreneurs who had not made any imports in the financial year to contact the Supreme Audit Office. There they should clarify the whereabouts of the money.

But the judicial authorities were not satisfied with Rouhani's explanation. Prosecutor General Ali Alghasi announced on April 27 that his agency was investigating 25 employees of the Iranian central bank, including some high-ranking employees. These had paid the approved sums to the importers.

The explosive nature of the incident lies not least in Iran's complicated exchange rate system. The government finances its budget up to 40 percent with foreign exchange income from oil exports, mostly in dollars. She exchanges her earnings on the Iranian market and changes the dollars into Iranian rials. With them she finances the Iranian state apparatus.

However, there are two exchange rates within the country: an official one, subsidized by the state. It offers a very cheap exchange rate: One dollar is available there for around 42,000 rials. However, only a few people benefit from this course - such as entrepreneurs who import important products such as raw materials for industry or medicines on behalf of the government

The second exchange rate common on the free market is considerably less favorable for those who only have the Iranian currency. There, more than three times the sum has to be paid for one US dollar, namely around 155,000 rials.

The $ 4.8 billion paid out to importers is subsidized foreign exchange. The recipients are system-loyal and well-connected entrepreneurs, referred to by the Iranian President as "valued business people". Their standing in government circles is based on their important role in circumventing US sanctions.

Because Iran can hardly import any more through regular trade channels due to the US financial sanctions. Even with medical and humanitarian goods, financial transactions are difficult. In this situation, the importers obtain the goods they need through their companies established abroad, in order to then bring them to Iran with special permits from the authorities. 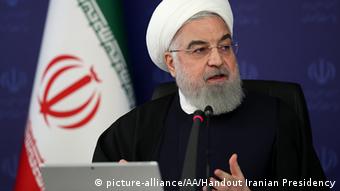 High losses for the taxpayer

Should the whereabouts of the missing funds not be clarified, it would cost the taxpayer dearly. Because the three times cheaper subsidized rate means for them that the amount of the loss has tripled if the missing funds do not reappear. The taxpayers would have to reimburse the losses in rials, based on the free exchange rate, which is three times more expensive for them.

It is still unclear whether the money was accidentally or deliberately not paid back. However, importers have repeatedly been accused of corruption and nepotism. One of the most famous cases is that of Shabnam Nematzadeh. The well-connected daughter of a former industry minister was sentenced to 20 years in prison last December for corruption and manipulation of the drug market. Their companies had special permits for the import and distribution of medicines in Iran.

Iran is currently under financial pressure due to massive US sanctions against its oil sector. Because in order to reduce Iranian oil exports to zero, the USA is threatening every buyer of Iranian oil with economic sanctions. The result: From June 2017 to January 2020, oil exports shrank from 2.2 million barrels to just 400,000 barrels a day. The national budget is also shrinking accordingly.

In addition, there is now the corona crisis, which affects the country extremely economically and medically. For the first time in over 50 years, the government applied for a loan from the International Monetary Fund, IMF, for around five billion dollars to combat the crisis. In the current situation, the country cannot afford a lax approach to tax revenue.